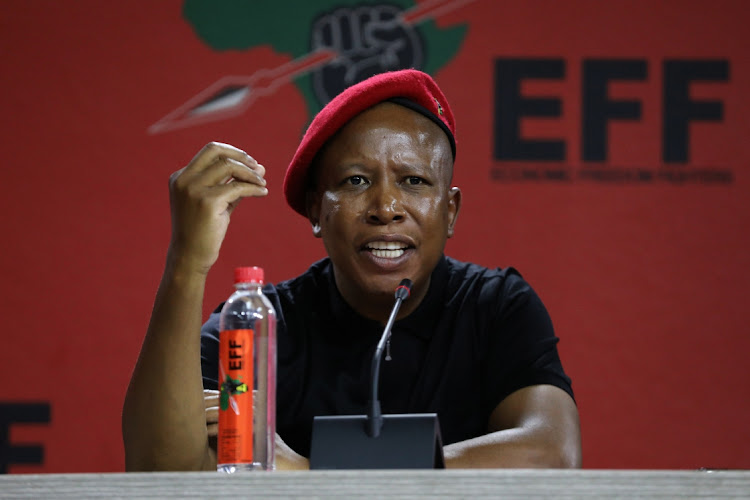 EFF leader Julius Malema insults anybody he can think of instead of responding to journalists questions, the writer says.
Image: Thapelo Morebudi

The leaders of the spaza shop parties are taking us for granted. As for Julius Malema, he always irritates during his stand-up comedy sessions he calls press conferences.

He doesn't listen to questions by journalists. All he does is bully and belittle them. He thinks too much of himself. He claims not to be a puppet of white people, yet he votes with them. After the recent local government polls, everybody was under the impression that the press briefing was the EFF's postmortem to reflect on how it performed but instead it was all about the ANC and our president.

Instead of responding to questions, Malema goes about insulting anybody he can think of; honestly he doesn't look normal. The less said about him the better, he's wasting our resources by inviting media.

Herman Mashaba became a politician by default, he doesn't know whether he's coming or going.

He quit the DA because according to him they're racists. His party was formed to counter the DA's racist tendencies. This proves that he has never been a politician, he should stick to business. He has now formed a B side of the DA.

I can go on and on about these clowns but I'd rather stop here. I hope their followers are learning not to join a political party that was formed out of anger.

The arrest of a 49-year-old man after a blaze ripped through the National Assembly building is not the first time security has been breached in Cape ...
News
4 months ago

#Zuma dominates social media for yet another year

Former president Jacob Zuma is still the most talked about South African on social media.
News
4 months ago
Next Article