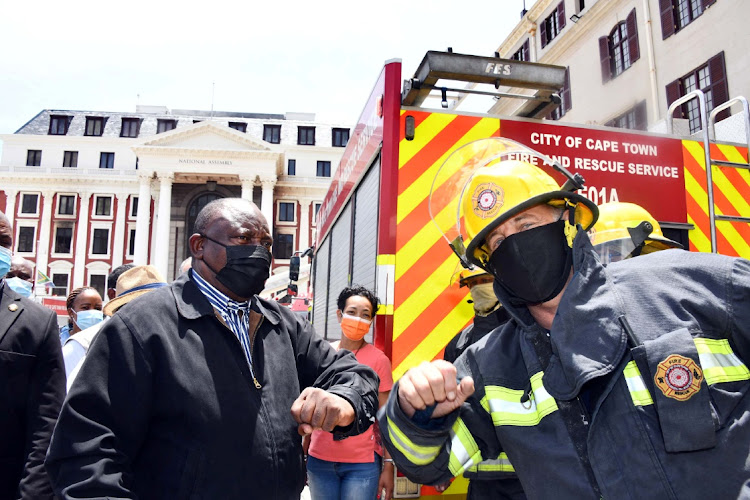 South African President Cyril Ramaphosa bumps elbows with a firefighter as he inspects damages after a fire broke out at the Parliament building in Cape Town, South Africa, January 2, 2022.
Image: ELMOND JIYANE/GCIS/File photo

The arrest of a 49-year-old man after a fire ripped through the National Assembly building is not the first time security has been breached in Cape Town's parliamentary precinct.

The suspect has since been charged with housebreaking, theft and arson and will also be charged under the National Key Points Act.

Security guards were allegedly not on duty when the fire broke out.

Previous incidents include one in November 2021 which left MPs shaken after DA chief whip Natasha Mazzone’s office was broken into. Burglars entered the office, apparently using keys, ripped light bulbs from the ceiling, broke cupboard locks and made off with expensive items.

Speaker Nosiviwe Mapisa-Nqakula said CCTV cameras were not working at the time of the incident.

MPs on the National Assembly’s programme committee recently shared their experiences of security breaches, including the theft of an MP's car wheel, reports of unidentified people roaming about and, in some cases, using MPs’ bathrooms.

In October TimesLIVE reported that thieves had been stripping copper wire from parliament’s bathrooms. Taps and copper pipes from toilets in two of the institution’s buildings were missing.

Sources said at the time there were no signs of break-in and suspects could be people who legitimately entered the precinct.

In April 2017 at least five computers were stolen from the SABC offices on the first floor of the Marks Building. There was no sign of forced entry into the newsroom.

The incident was captured on CCTV and video footage showed an intruder stealing a computer and documents.

In September 2016 detectives were dispatched to parliament to investigate a break-in at the offices of then National Assembly house chairperson Thoko Didiza. She and her secretary informed parliament’s security service that her office door had been locked but was open when she arrived for work the next day.

Parliament security guards were not on duty when fire broke out because of cost-cutting, says union

Mali said security guards were not on duty when the fire broke out due to a cost-cutting directive they received at the beginning of December.
News
4 months ago
Next Article