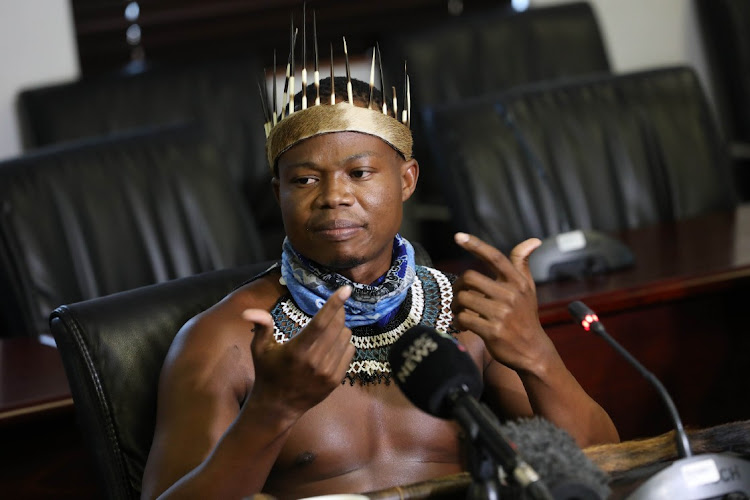 Ndebele activist Thando Mahlangu, who was at the centre of the cultural storm at Boulders Mall in Midrand. The writer says he somewhat agrees with the facility manager that there was some element of indecency in the way the man was dressed.
Image: Veli Nhlapo

When I first saw the video on social media of this facility manager denying entry to this man wearing traditional attire, regarding it as indecent, I also got disturbed about this black manager's attitude towards a fellow black person.

But on viewing the other video showing the front view of this same man wearing so-called traditional attire, I somewhat agree with the facility manager that there was some element of indecency in the way the man was dressed.

Consultation with some Ndebele traditional experts mostly reveal that it was unusual for a male to dress the way he was dressed. The wearing of blankets by a male person is restricted to particular events and surely not for public gatherings such as doing shopping.

Decent traditional wear does not expose underwear the way this "traditional" person did. Maybe the facility manager would have deemed his dressing decent had he also covered his underwear with that colourful blanket he was wearing.

Mahlangu's Africanism a wake-up call for us

Following the video clip taken at The Boulders, the Midrand mall where shopper and cultural activist Thando Mahlangu was pilloried by the centre ...
Opinion
6 days ago

Mahlangu forgives mall manager who humiliated him over attire

Ndebele rights activist Thando Mahlangu says he wants the manager who was suspended from Boulders shopping centre in  Midrand, Johannesburg, to be ...
News
1 week ago

Ndebele activist Thando Mahlangu, who was at the centre of the cultural storm at Boulders Mall , said he was profiled because the SA economy is built ...
News
1 week ago
Next Article