No toyi-toyi over innocent lives lost in taxi crashes 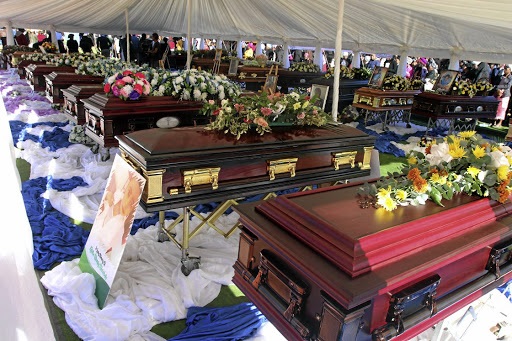 Coffins are lined up in two rows during the funeral service of 21 of the 24 victims of the collision between an overloaded minibus taxi and a bus June 16. The service was held in GaRapitsi Vilage in Kgapane at the weekend.
Image: ANTONIO MUCHAVE

A couple of weeks ago there was a horror crash on the road to Durban, a multiple-vehicle accident which included two taxis. Many people died.

It made me sick to see the bodies, strewn all over the road.

A week ago, 24 taxi passengers died instantly when their vehicle and a bus crashed. A few days later more people were snuffed out in a taxi collision.

These incidents point to just another day in SA. South Africans drive too fast, overtake with alacrity and no regard for their or the safety of others. The human brain is the fastest computer on the planet in its ability to track oncoming vehicles and the time we have to overtake and get back safely into the left lane in the face of an oncoming vehicle, is incredible.

We are amazing but I must say that half the drivers just do not possess the brain power or the training/experience, to make the necessary calculations in order to drive safely. They just don't perform the rudimentary calculations which are required on a second-to-second basis while driving on any road.

Were over two dozen South Africans to be killed in a mining disaster, even if caused by an act of God in an earth tremor, or the same number to die in a plane crash, or at a construction site, there would be a public outcry, the government would be ordering judicial inquiries, and the trade unions would be jumping and toy-toying all over the show.

The opportunistic in the likes of the EFF would be casting blame on the ogres of White Capital. We would, however, not feel like we have witnessed a mass murder as we do in the case of the road carnage.

The taxi industry is massive, and it plays a vital role in the life of most South Africans, whether directly or indirectly. I don't take a taxi, but my entire staff do. I worry about this daily.

Everyone of my staff has been involved in a taxi accident, including one which rolled on Oxford Road. On Oxford Road. how did the driver manage to pull that off?

19 school pupils among the dead
News
2 years ago

If a calculation were to be done of the total number of road fatalities in SA, I can bet my life that a disproportionate number would be attributable to the taxi industry. There are a few taxi drivers who appear to obey the rules of the road, but by far the majority have no respect for the rules of the road.

I am appalled watching taxis, packed to overflowing, shooting red lights, speeding on the highways with bald tyres which seem to be splaying out more like wings than wheels. It is very obvious even to the casual observer that well over half the taxis on the road are unroadworthy.

I've not seen a Metro traffic cop catch a taxi for a moving violation. On any day driving to work, only 15km, I can count 50 such incidences of taxis a day, making moving violations from Bryanston to Rosebank and never see a Metro cop catch one. Is there any truth behind the urban legend that the taxis are in a large part owned by Metro cops?