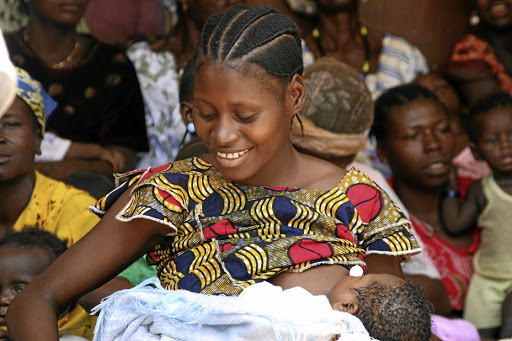 When a mother needs to feed her baby, she should do so without hesitation and fear.
Image: 123RF

When Linda Mtoba, the TV actress and former Isibaya star, took to social media to say breastfeeding in public was not a shame, some people took her statement the wrong way.

Some thought it was a self-promoting stunt, to announce to the public that she has a new baby and so on.

But Mtoba's public stance reminded me of what happened a few years ago in a long queue at the home affairs offices in Randburg.

We'd been standing there for almost an hour when suddenly there was this loud verbal exchange.

A young black woman, one of those who think they are sophisticated because they are wearing weaves and their skin is bleached, was castigating an older black woman in isiZulu: "Sorry, sisi, but you can't breastfeed in public. What are white people going to say? It's very backward."

The older woman was rural in demeanour and she immediately stopped breastfeeding the baby.

The baby started wailing frantically. But even before the child started crying, I had already started moving towards the two women.

I don't ordinarily involve myself in other people's affairs - I do that through my pen - but I couldn't stand by and watch an old woman being humiliated, just to protect white people from the perceived trauma of watching a black woman feeding her child. So I told the woman to continue breastfeeding her child if she wanted to.

Actress and new mom Linda Mtoba is not here for those who have an issue with her breastfeeding in public, telling her followers that moms should not ...
Pic of The Day
1 year ago

For the benefit of the haughty damsel in a weave, whose priority in life seems to be validation by white people, I spoke in English, also so that the whites in the line could hear what had been said in their name.

One white woman in the queue was p****d off at the lady with the weave who'd appointed herself as an upholder of white standards. The whole thing was becoming a scene from a Tyler Perry movie.

In the white community, breasts carry a sexual innuendo. Not so much in the black community. Unless, of course, you're one of those blacks who have internalised whiteness even though they don't fully understand what it is all about.

You may speak English through your nostrils, dear, but you're not white.

Where I come from, during traditional ceremonies young women are encouraged to walk about with their breasts exposed. It's not an issue at all. In fact, it's a celebration. They are seen to be proud of their bodies.

But even then, I don't see why breastfeeding in public should be a taboo at all - even in the community that frowns upon breasts being shown in public.

More than 200 babies were delivered in Gauteng public healthcare facilities on New Year's Day, the health department said on Wednesday.
News
2 years ago

When a mother breastfeeds, she doesn't really expose her breasts.

When a mother needs to feed her baby, she should do so without hesitation and fear. Yes, some public amenities, such as airports, do provide facilities for breastfeeding mothers. But generally, such facilities are rare.

If you subscribe to the notion that it is indeed barbaric, just look away. Who asked you to watch in the first place, you pervert?

And, by the way, the be-weaved bleach-skinned damsel who took it upon herself to "civilise" the breastfeeding mother was, throughout our encounter, chewing gum with her mouth wide open - nxamf-nxamf-nxamf-nxamf!

Now guess who needs to be taught a thing or two about civilisation and public etiquette?