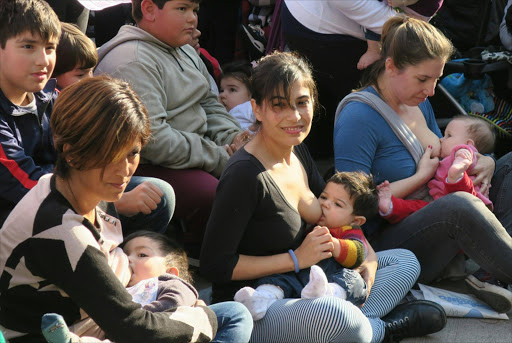 epa05438558 Hundreds of women gather to breastfeed their children in Buenos Aires, Argentina, 23 July 2016. The protest was held after a 22-year-old woman breastfeeding her son was reportedly removed from a public square by police officers last week. EPA/IRENE VALIENTE

Breastfeeding has been proven to protect the health of mothers and babies. It naturally inoculates babies against disease because the mother’s immune system kick starts the baby’s ability to resist illness. This applies in both low-income and high-income settings.

For mothers, breastfeeding is also good. It is a natural contraceptive because it interrupts the menstrual cycle, and it protects women against breast and ovarian cancer.

Despite all these benefits, only 38% of babies are exclusively breastfed across the world.

A number of initiatives have been put in place to turn this situation around. One of these is the Baby-Friendly Hospital Initiative, a UNICEF and World Health Organisation scheme launched in 1991. The idea was to make sure that all maternity wards, whether free standing or in a hospital, became centres of breastfeeding support.

Since its launch, more than 152 countries have signed up to the initiative. And by 2012 more than 21 300 facilities were designated baby friendly. This is close to 30% of all facilities worldwide and 31% of facilities in low and middle income countries.

But of the 152 countries, only 18 have reported setting up a government committee to direct and enforce the initiative.

South Africa, despite its bold commitments to improve breastfeeding, has not reported to the World Health Organisation. It still does not have national data to monitor breastfeeding rates to ensure that its policies are being effective.

And unless the country creates structures that ensure facilities become mother and baby friendly, breastfeeding rates in the country are unlikely to improve.

What it means to be baby friendly

The 10 Steps of the Baby-Friendly Hospital Initiative is a proven strategy to provide this support at the critical time of delivery and just after. It increases all aspects of breastfeeding – initiation of breastfeeding immediately after birth, exclusive breastfeeding in the first six months of life, and continued breastfeeding until the child is a toddler.

Its success is evident in countries like Cuba where, as a result of most of country’s 56 hospitals and maternity facilities being baby-friendly, the rate of exclusive breastfeeding at four months almost tripled in six years from 25% in 1990 to 72% in 1996. This success is related to government commitment and ongoing monitoring.

No official data has been released, but South Africa’s National Department of Health claims that the country has accredited 70% of its public hospital as baby friendly. The fact that 30% are not accredited indicates that there is no uniform system and no concerted push for accreditation.

There is also no information readily available on the accreditation of private facilities.

The ten steps include:

- a written breastfeeding policy which all health care staff know about and are trained in informing pregnant women of the benefits and management of breastfeeding helping mothers initiate breastfeeding within one half-hour of birth and showing them how to breastfeed and maintain lactation giving newborn infants no food or drink other than breastmilk, unless medically indicated.

All these steps help a new mother to breastfeed her baby. This in turn protects babies from respiratory infections and cuts diarrhoea episodes by half. As a result, breastfed babies are four times less likely to die in the first six months of life.

Breastfeeding also boosts babies' health and intelligence and reduces their rate of behavioural problems in childhood. Breastfed babies are less likely to be obese which means they are at lower risk of adult diabetes and cardiovascular disease.

The 10 steps initiative was adopted by South Africa in 1995. In 2012 it was renamed the Mother-Baby Friendly Initiative to stress support for mothers and babies and to assert the continued importance of exclusive breastfeeding by HIV positive women on antiretroviral treatment.

Roll out was initially slow. But by 2011 the Department of Health reported that 44% of public hospitals were accredited. This figure is alleged to have risen to 70% by 2014 but no official update report of the programme has been released by local health authorities.

New impetus was given to the initiative in August 2011 when participants at a national consultative meeting, including the Minister, Deputy Minister of Health and provincial health heads and managers, adopted the Tshwane Declaration of Support for Breastfeeding in South Africa.

The declaration committed South Africa to ensuring that all public and private hospitals and health facilities would be accredited as Baby-Friendly by 2015. Steps would be taken to ensure that once discharged, mothers would continue to receive support to breastfeed in their homes and communities.

But 2015 has come and gone and there is seemingly as yet no national system for requiring compliance, monitoring progress on accreditation or adherence to the 10 steps. South Africa also has few tools with which it can monitor whether breastfeeding rates increase in response to implementation. And little has been done to make communities more baby-friendly.

Although health authorities have pledged the best of intentions, they still have to put in place practical steps to ensure that the country can realise them.

What needs to be done

To follow up the bold commitments and ensure that they are implemented in South Africa, every hospital should be required to be mother and baby friendly. They should be inspected periodically to ensure compliance.

In addition, health authorities should collect national data to monitor breastfeeding rates to ensure that the policies are effective.

On top of this, South Africa needs to become more mother and baby friendly. More businesses and government departments must provide spaces for women to breastfeed.

And campaigns are needed to ensure that every women and her family know the value of breastfeeding, and how to breastfeed, before the baby is born. They must feel empowered to ask if the hospital they’re going to is accredited as baby and mother friendly.

This article first appeared in The Conversation