No matter who is being buried, all black funerals share similar characteristics 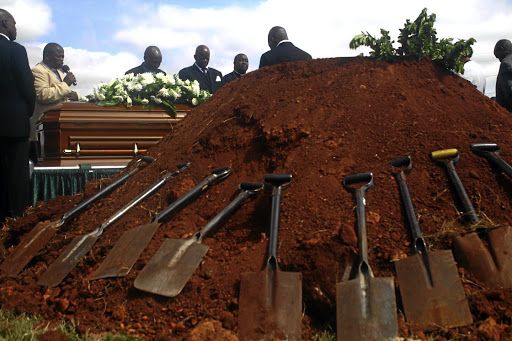 It is highly unlikely to attend a black funeral where a drunken uncle doesn't say something ill-timed, or an angry sibling doesn't tell everyone where to get off, says the writer. /KABELO MOKOENA

Watching the funeral of our beloved Mama Winnie this past weekend, I couldn't help noticing that her send off was nothing short of the usual six-hour stagecraft endured by most bereaved black families every weekend.

In fact, if you have attended the funeral of a white South African, you will be forgiven for wondering if they find closure, what with hardly a scheduling more than two speakers in their programmes for the funeral. And the ghostly peacefulness of the occasion. Then, to make sure you don't overstay your welcome, they serve extra-small sandwiches and tea.

Notwithstanding the fact that these individuals have not been friends over the past decade - since that little disagreement regarding church leadership and mismanagement of monies - he is the best speaker in the area and the uncle was outvoted when the decision to use him was made.

More to our beloved African names than just a label

We need to talk about names, our names, African names. Even people with a cursory understanding of the global African experience under slavery and ...
Opinion
4 years ago

The plan is to always exclude the uncle from the programme and trick him into guarding the burial site while the locals dig.

The family's plan B is to have him speak early, while he is still sober.

But the truth is he probably gets drunk at the sight of guests. And today, the only reason he is wearing a jacket is because he has a nip of vodka in the pocket nearest to his heart.

He knows everybody's scandal and is itching to tell the pretenders to save their crocodile tears because he did not see any of them visit his mother while she was sick.

And of course, this is an opportune time to remind the MC about the church funds conflict.

The child of the deceased is all cried out by the day of the funeral. He is at the 'anger' stage of his grief. He is here to finally tell everyone how disappointed he is in the family. He is the breadwinner and is well aware that his mother was cheated her share of the family fortunes.

This here gem pulls up in a Mini Cooper the morning of the funeral. She constantly refers to "burial" in her private school accent.

Instead of isipheko, she brings an enlarged photo of herself and 'grammy,' taken during those two or three occasions she made time to see her grandmother since she moved out of home. But she has always been the favourite.

There is a white man seated quietly towards the back, whose blonde locks are hard to miss, even in a sea of tired weaves and dramatic hats and doeks. He is a good-hearted colleague of a family member. As he looks ahead and smiles, the MC changes the entire programme's language policy. It is pertinent the blue-eyed African understand the procession. Forget that he had the opportunity to learn vernacular in his 32 years of existence.

And of course, it would not be a dignified black funeral without a hysterical mourner, who half collapses at the graveyard and scores a bottle of water from the special reserve in the small family gazebo. While everyone wonders who the hailing stranger is, some try to take the best photos of her moment of weakness.

Then, a young local remarks that it is 3pm and he is hungry. He has been at the graveyard since 5am with shovels and spades.