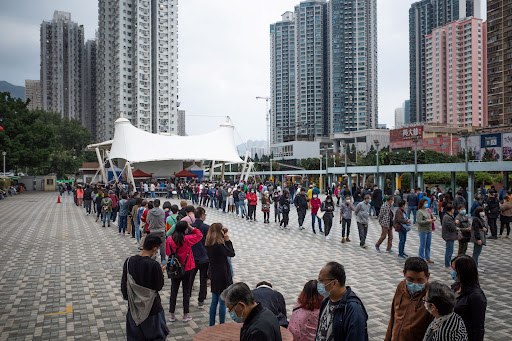 Hong Kong has confirmed another Covid-19 case linked to a scandal-hit birthday party that’s ensnared a minister in government quarantine as the city rushes to contain an omicron outbreak.
Image: Bloomberg

Hong Kong has confirmed another Covid-19 case linked to a scandal-hit birthday party that’s ensnared a minister in government quarantine as the city rushes to contain an omicron outbreak.

The 43-year-old woman went for a meal and then to the party with a person who days later tested positive for Covid-19. Because her name hadn’t been on the guest list, she wasn’t swept up in the government’s quarantine of about 200 attendees last week, health officials said in a briefing Sunday.

The woman has been asymptomatic and active in the community in recent days, going to work and dining out at venues across the city. On Saturday, she went to a community testing center after receiving a compulsory testing notice and was found positive.

Scores of government officials and lawmakers attended the celebration for Witman Hung, a local representative for the Shenzhen Qianhai Authority, on Jan 3. despite government warnings days before to avoid mass gatherings. The celebration began at 6pm at a restaurant and continued until about midnight, officials said.

Immunity against Covid-19 is a complex picture, and while there is evidence of waning antibody levels six months after vaccination, T-cells are also ...
News
1 week ago

As Hong Kong’s hospitals and isolation venues fill up, officials said Monday they will allow close contacts of confirmed patients to quarantine for 14 days in government facilities, down from the previous 21 days. After leaving the camp, they are allowed to move around the city, but should monitor their health conditions and get tested on the 19th day.

“The number of close contacts in isolation facilities are surging and cause big pressure,” said health official Chuang Shuk-kwan, adding that omicron cases typically develop more quickly, in about two to three days, after transmission.

It’s the second time the government has eased quarantine requirements since the omicron outbreak started, reflecting the squeeze on capacity as thousands get swept up in its aggressive contact-tracing and tracking. About 800 people are waiting to enter the facilities, which would take up almost all available space, said Chuang.

On Saturday, officials said discharged Covid-19 patients can serve 14-day compulsory isolation at home or other designated locations, without specifying what they might be. Previously, recovered patients had to isolate in the government camp.

Last week, two guests tested preliminary positive for Covid-19 who weren’t at the party at the same time, causing all attendees to be ordered to Hong Kong’s spartan isolation camp at Penny’s Bay. One of those guests was later confirmed to be a false alarm, sparing many ministers and legislators from the isolation facility.

Those who left the party before 9.30pm — when the two known cases arrived — hadn’t been exposed to the virus. The government said Monday that only some 104 people only needed to be isolated.

The head of Brazil’s health regulator Anvisa has asked the country’s vaccine-sceptic President Jair Bolsonaro to retract statements he made ...
News
1 week ago

Hong Kong CEO Carrie Lam on Saturday launched a disciplinary inquiry into 13 officials who attended the party, saying they’d been told not to continue with their duties while they entered quarantine using their vacation leave.

Junius Ho, a legislator from the Election Committee constituency who attended the party, blamed Lam’s government for failing to plug a loophole that allowed Cathay Pacific Airways Ltd. employees to bring the virus into the community.

“We are the victims of the policy,” Ho, who had to quarantine briefly, told local the South China Morning Post. Days after the party, Ho met Xia Baolong, who heads Beijing’s Hong Kong and Macau Office, in Shenzhen, the newspaper reported.

What Quarantine Is Like Inside Hong Kong’s Bleak, High-Security Camp

The scandal hits as more evidence emerges suggesting that the highly contagious omicron variant is silently spreading in Hong Kong. The city now has at least three transmission chains and officials said last week they can’t rule out hidden clusters in the community.

On Monday, Hong Kong reported a positive case with an unknown source. The person is a part-time salesperson at a popular department store who last went to work on Dec. 28.

(Updates throughout with confirmation of cases and shortening of quarantine for close contacts.)