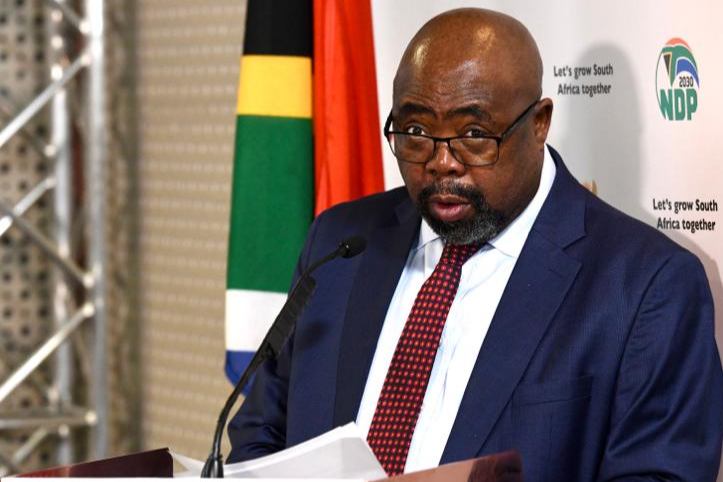 Labour minister Thulas Nxesi on Saturday said the government will not allow South Africans to treat foreign nationals like animals because they too have rights.

Speaking during the presidential imbizo in North West, Nxesi said the government frowned upon acts that made documented or undocumented foreign nationals feel unwelcome in the country.

“What we do not agree with, are the politicians who just jump into the workplaces and say they have come to inspect. Inspect what? Because when they are there, they confuse the people,” he said.

“It cannot be allowed because they are disrupting production in those particular workplaces. We also do not agree with this Dudula approach because it creates confrontation and can lead to violence.

“All we are saying is that Dudula must come to us ... and put in their proposals so that we are able to deal with this matter in an amicable way. We cannot allow violence and that is why we are going to be harsh when it comes to those areas. The police will be there to deal with that.”

'We don't want to be illegal, it's the system': Refugees are battling digital divide to stay documented

Many refugees are struggling to use the new online permit renewal system, resulting in undocumented refugees losing access to bank accounts and ...
News
5 months ago

The discussion was prompted by questions from communities in the Ngaka Modiri Molema district in Mahikeng who had been invited to share their concerns about the state of their province.

Nxesi, who was one of about 12 ministers who accompanied President Cyril Ramaphosa, was referring to an incident in January when EFF leader Julius Malema embarked on  controversial inspections of the hospitality industry to cheque the ratio of foreign nationals at work.

The minister also condemned Operation Dudula, which started in Soweto last year and has since morphed and spread to inner Johannesburg and Hillbrow. The movement aims to root our illegal or undocumented foreign nationals, particularly those setting up shops and engaging in alleged criminal acts in the country.

Nxesi said the government has heard the complaints from South Africans, especially when some employers in the agriculture, security, tourism and hospitality industries do not employ locals.

“We are even starting to see this in the big retail shops, where they prefer to take non-SA nationals — not because they love them but because they want to exploit them and don't pay them the agreed salaries and benefits ... They are just exploiting cheap labour.”

Though these were semi-skilled people, Nxesi said this did not mean the country did not have those skills.

“We are dealing with that particular matter and the way to do it is to regulate it properly because we are a human rights country. We are a country which has signed a number of international obligations on how to deal with refugees. They also have human rights, we cannot treat them like animals.”

Nxesi said SA had looked at how other countries were dealing with the matter.

“Countries like Kenya, Zimbabwe and Nigeria say no-one should be employed coming from the outside if there is somebody in that country who can do the job. We can only talk about the scarce skills.”

He said SA has been able to list all the scarce skills where people can employ foreign nationals but only for a particular period.

“In the semi-skilled area, we are saying we must employ South Africans but we must regulate that properly. But what we cannot do in terms of the constitution and the law, we can’t ban them. We can regulate and even put quotas.”

He said the government has released a document giving people three months to comment so that a policy can be finalised and the law can be amended to define where and for how long foreign nationals can be employed.

Scores of community members from Ekurhuleni, east of Johannesburg,  gathered in Daveyton on Saturday ahead of Operation Dudula demonstrations. Some ...
News
5 months ago

The cabinet has condemned the recent violent and public clashes between South Africans and allegedly undocumented foreigners in Alexandra township ...
News
5 months ago

Lately, some talk radio presenters and listeners have characterised #OperationDudula as a meeting ground for xenophobic thugs intent on taking the ...
Opinion
5 months ago
Next Article