'We don't want to be illegal, it's the system': Refugees are battling digital divide to stay documented 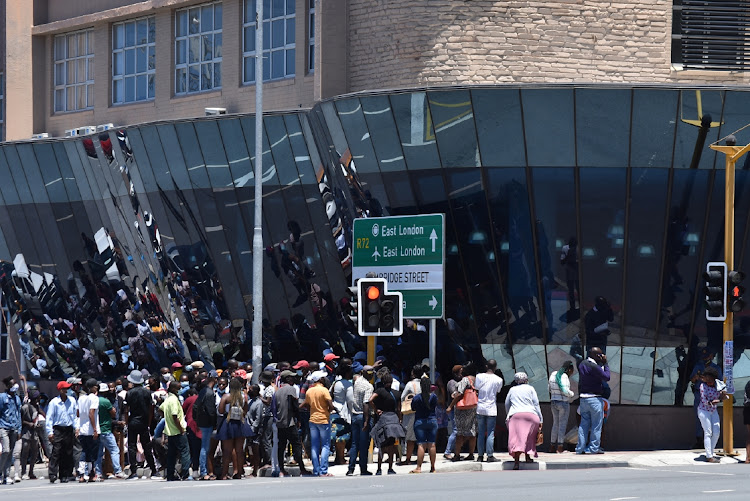 Many refugees are struggling to use the new online permit renewal system, resulting in undocumented refugees losing access to bank accounts and education. File image: A queue outside the home affairs offices in East London.
Image: RANDELL ROSKRUGE

When her refugee permit expired in June last year, Congolese nurse Marseline Buhoro started getting calls from her bank in Johannesburg saying her account would be frozen.

Then her children's university told her they would not be able to graduate because her family was technically undocumented.

Buhoro pleaded for a grace period, explaining she had finally figured out how to apply for a renewal using the government's new online system but had been waiting months for confirmation that her application went through.

“It's like a second trauma,” said the 53-year-old nurse who came to SA in 2005 to escape a civil war that killed her husband and three of her children.

“They freeze your account, your landlord is on your neck, you can't buy food because you have no access to money — then it's the stigma of being in the country illegally,” she told the Thomson Reuters Foundation in a phone interview.

Many, many, many refugees don't even have an email address ... how do we expect them to do an online permit renewal that isn't yet efficient?

The new online system that went live in April 2021 was supposed to be a lifeline for refugees and asylum seekers who had not been able to renew their permits since refugee reception centres closed in 2020 during the national Covid-19 shutdown.

But refugee rights groups warn that tens of thousands of applicants have been struggling to navigate the new system or have failed to receive responses to their applications, causing them to miss a December 2021 deadline for permit renewals.

In late February, the department of home affairs (DHA) announced in a government gazette that a new deadline would come into effect, giving applicants until the end of April 2022 to renew their permits.

But with SA's refugee reception offices still closed, those struggling with the online system face the risk of deportation, bank account closures, evictions and police harassment once the new deadline passes.

The national government and Cape Town authorities are having a public spat over the housing arrangements of foreigners who recently occupied the ...
News
2 years ago

While moving government services online can help save time and money, refugee advocates say it can also worsen the so-called digital divide — the gap between those who can access and know how to use the internet and computers and those who don't.

Only half of African countries teach computer skills at school, compared with 85% of schools globally, according to the World Bank.

Internet connectivity is another challenge, with figures from the International Finance Corporation showing less than a quarter of Africans have online access — in Europe, the figure is 80%.

“Younger refugees have computer literacy, but many of the older refugees have limited experience on a computer,” said Abigail Dawson, an advocacy officer at the Jesuit Refugee Service (JRS), an international charity.

“Most refugees and asylum seekers work in the informal sector with precarious incomes.

“Data and access to Wi-Fi are an unexpected expense when having to go to an internet cafe,” Dawson said in emailed comments.

With the help of the JRS, where she works taking care of terminally ill people, Buhoro managed to carry out all the steps required by the new system: she created an email address, scanned her documents and emailed them to the DHA.

Two months later, after the JRS helped her send repeated follow-up emails, her permit came through just before her bank account was due to close, and her children were able to continue their studies and eventually graduate.

“Many, many, many refugees don't even have an email address ... how do we expect them to do an online permit renewal that isn't yet efficient?” Buhoro asked.

DHA spokesperson Siya Qoza told the Thomson Reuters Foundation that the refugee reception offices will open again, but did not give an exact date or say how long the online system would stay in place.

Anyone who has applied to renew their permit but not received a response “is requested to resubmit”, Qoza said in emailed comments.

Lindela centre guards who reportedly downed tools, leading to mass escape, have nothing to answer for yet

The seven guards from the Lindela Repatriation Centre in Krugersdorp who allegedly abandoned their posts, leading to 37 undocumented migrants ...
News
2 years ago

According to figures from the DHA, more than 155,000 refugees and asylum seekers renewed their documents through the online system between its launch in April and December 2021.

Authorities estimate that nearly 71,000 permits due for renewal are unaccounted for as refugees and asylum seekers may have left the country, died or may not be able to use the new system, Qoza said.

Some of the challenges applicants say they face include the fact that the online information is only in English, which is not the first language of most refugees and asylum seekers.

Staff at JRS and Refugee Social Services (RSS), a charity in Durban, say successful applications have been hindered by DHA reports of “system crashes”, requiring applications to be resent.

And both organisations report many applicants getting confirmation emails without the permits attached, as well as having emails ignored if they do not contain the applicant's permit number in the subject line.

Britain is not easing its rules for Ukrainian refugees seeking to come to Britain but it does expect its existing route to expand quickly, minister ...
News
5 months ago

Internet cafes are also exploiting people without a computer at home, charging refugees up to R300 to assist with applications which are supposed to be free to submit, say refugee rights groups.

“Online shouldn't be the only option,” said Gaby Bikombo, a former refugee from the Democratic Republic of the Congo and an advocacy officer at RSS.

“If (the government) can design something user-friendly and in the refugees' spoken languages, it would make a big difference,” he said at his office in Durban.

There are many lived implications to being undocumented, said RSS director Yasmin Rajah.

“Documentation is the gateway to everything — bank accounts, work, housing ... There is also a risk of statelessness for children born to undocumented parents,” which would put them in a legal limbo with no citizenship, she said.

More than 1.7-million Ukrainians have fled to Central Europe: UN

More than 1.7-million Ukrainians fleeing Russia's invasion have so far crossed into Central Europe, the UN's refugee agency said on Monday, as ...
News
5 months ago

Groups like JRS and RSS are helping refugees and asylum seekers apply for their permits online, but every day between 15 and 20 more are queuing up for assistance, said Buhoro, who now guides others through the application process.

Refugee rights groups have been petitioning the DHA to change the system, including swapping it for a centralised online portal through which application documents can be uploaded and processed, rather than relying on emails.

They are also calling for partnerships with local libraries and schools to provide access to computers and the internet as well as instructions and guidance in languages spoken across refugee and asylum seeker populations.

But for now, many refugees and asylum seekers still live with the fear that incorrectly filling out an online form or not having an email address could mean being deported from the country they want to make their home.

“We don't want to be illegal, the system makes us illegal,” said Buhoro.