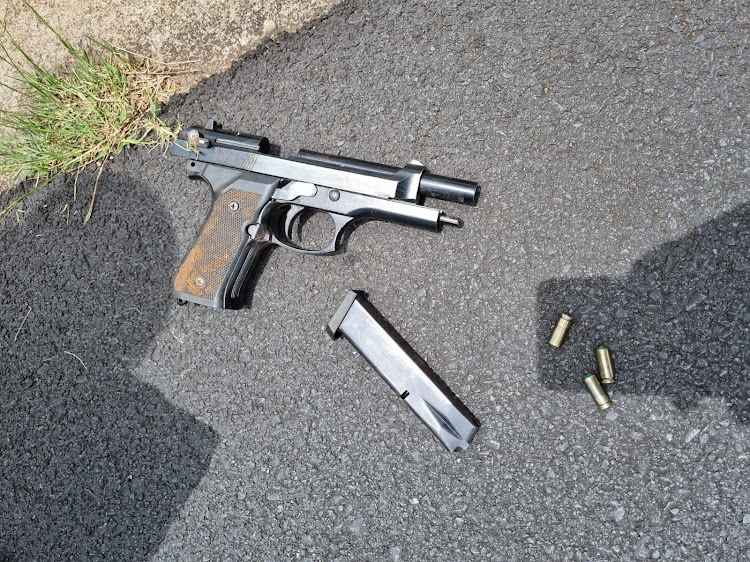 Police said the suspects were found in possession of an unlicensed firearm, cellphones and laptops stolen from the surgery.
Image: Saps

One suspect was shot and wounded and another arrested after an armed robbery at a surgery in Roosevelt Park in Johannesburg on Monday.

Police spokesperson Lt-Col Mavela Masondo said the two men were arrested after police received information about a planned robbery at the surgery on Monday morning.

He said at around 8.45am officers spotted two suspects leaving the surgery.

“As the police officers were approaching, the suspects jumped into a getaway car. A high-speed chase and shoot-out ensued until the suspects’ car crashed into a pole.”

Four suspects linked to a gang responsible for car hijackings and armed robberies in the south of Johannesburg were arrested at the weekend.
News
1 week ago

Masondo said one suspect was shot and taken to hospital under police guard while the second suspect, who was uninjured, was detained.

The suspects were found in possession of an unlicensed firearm as well as cellphones and laptops stolen from the surgery.

“Both suspects will be profiled to establish if they are linked to other crimes, especially robberies at surgeries in and around Gauteng,” Masondo said.

The two men are expected to appear in the Johannesburg magistrate’s court on Tuesday facing charges of business robbery, possession of an unlicensed firearm and suspected stolen property.

Police on Saturday revealed that a joint task force consisting of officers from the Hawks, crime intelligence and the Qonce Flying Squad had arrested ...
News
1 week ago
Next Article