Tickets for the ANC gala dinner have been sold out and these include the seats that sold for a whopping R1.2m to sit next to party president Cyril Ramaphosa.

The ANC will host the fundraising gala dinner at Protea Hotel Polokwane Ranch Resort in Limpopo on Friday ahead of the January 8 statement.

This is in an effort to secure funds for the broke governing party, which is celebrating its 110th anniversary.

Progressive Business Forum convener Sipho Mbele told Sowetan on Thursday they had surpassed their own expectations.

Mbele confirmed all tickets were sold.

“Yes, this includes the R1.2m tickets. We’re currently dealing with a situation where there is a lot of demand for the tickets but we must first deal with compliance because we are limited to a certain number of people.

“We’ve surpassed our own expectations and what this means is that business still wants to engage with leaders of the ANC.

“The dinner will not only be attracting business from leaders from Limpopo but outside the province as well. Some are flying in and others are driving from Gauteng,” Mbele said.

Aside from seats next to Ramaphosa, a seat next to party deputy president David Mabuza will cost R1m while sitting next to the party's national chairperson Gwede Mantashe and treasurer-general Paul Mashatile will set you back R95,000. 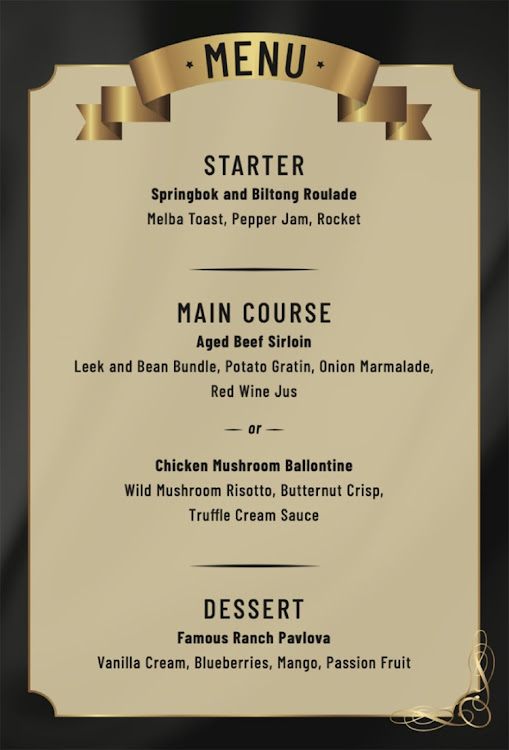 The menu for the ANC gala dinner in Polokwane.
Image: SUPPLIED

While others might rejoice assuming money is coming into ANC coffers, the party’s head of organising Nomvula Mokonyane assured the media the ANC would be considerate of its spending and not splurge.

From the number of attendees to the spending, the ANC’s January 8 statement will be scaled down due to the party’s financial struggles.

The ANC is so broke it has struggled to pay salaries of its staff for the past several months.

While not divulging how much the party had spent in organising the event and where it secured the funds given its current financial troubles, Mokonyane said the ANC had scrambled to make the event happen.

“Of course the ANC is going through serious challenges of the non-availability of resources but we are doing everything with the little that we have and izinto ziyahlangana [things are coming together]. We are mindful that we can’t go overboard when our own staff members have not been paid all their salaries,” she said.

Luthuli House staffers said while they understood the party's financial struggles, they could not “eat sympathy”.

One ANC volunteer who gets paid by Luthuli House said she had about two months in outstanding salaries from the ANC.

“Seeing the preparations doesn’t make me feel good because we’re inundated by calls from companies that we owe money, our policies aren’t paid up and we’re doing things we’re not accustomed to in order to get by."

ANC head of organising Nomvula Mokonyane says the party will be prudent as it still owes employees salaries.
News
4 months ago

Hours after promising that Covid-19 regulations would be strictly adhered to, the ANC had to cancel an address by President Cyril Ramaphosa at an ANC ...
News
4 months ago

President Cyril Ramaphosa is a son of the soil in Limpopo and ANC members in the province are satisfied with his leadership - that is why some have ...
News
4 months ago
Next Article