It was taboo to talk about sex with elders, says woman in Zondo rape trial 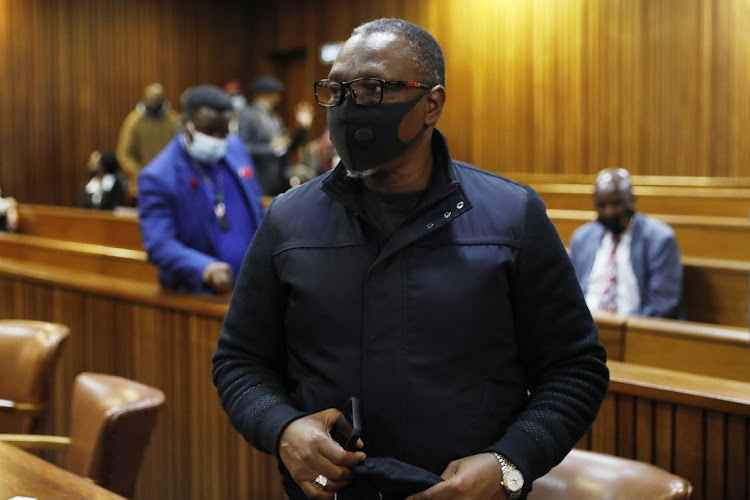 Bishop Bafana Stephen Zondo looks on during his sex crimes trial at Gauteng High Court on August 30, 2021 in Pretoria, South Africa. The controversial Rivers of Living Waters Church leader Bishop Zondo is facing 10 charges, including rape, several in terms of the sexual offences act as well as defeating the ends of justice.
Image: Phill Magakoe

The woman accusing Archbishop Stephen Zondo of rape has been questioned why for decades she did not tell her mother about the sexual abuse she had suffered instead later chose to go to a radio station as an adult.

Zondo’s lawyers interrogated the 46-year-old woman for hours on Thursday on the reasons why after being raped three times by a relative at her grandmother’s house, she never told her parents.

The woman testified that she only told her brother years after the rape happened in 1981 but did not give details of how the rape occurred. She said she was raped three times during her three-month stay at her grandparents’ home in Sebokeng. After the third incident the woman, who as eight years old, moved back to her parents' home. She had been taken to her grandparents’ home as her mother had left their home pregnant with her sibling.

Details of a six hour meeting in which the woman accusing Archbishop Stephen Zondo of rape was offered compensation have been laid bare on the second ...
News
2 weeks ago

She testified this week that she also told her cousin, a sister to Zondo about the rape but she could not specifically tell the court when she confided with these family members.

Prosecutor Adv Piet Pistorius, SC, questioned why she did not tell her father about the rape when she returned to her parental home.

“I did not tell my father. As I said, it was a taboo to speak to elderly people about sex, kiss or anything relating to intimacy,” the woman replied.

Pistorius then asked: “Are you telling this court if a boy rapes a girl, and that girl happens to be you, you would not be given an ear because it was taboo [to talk about sexual things at home].”

“My father would not have given me an ear because in my family, they were respecting each other. I would have been beaten very much… During those day it was taboo to speak about sexual matters with children,” the woman replied.

She earlier testified that after the first rape, she suffered scarring in her private parts, struggled to walk properly and had pains in her groins.

However, the woman added, after the third rape, she found ways to walk properly and not allow anyone to see that she had been hurt. Bleeding only came back when she played rough with other kids outside.

The rape also affected her behaviour.

“I was very close to my father but because of this, I started to withdraw from male persons,” she said.

She told the court that even at school, no one knew about the rape as teachers had no interest in children’s personal matters.

Zondo, founder of the Rivers of Living Waters Ministries in Evaton in the Vaal, is facing nine counts of rape, which include women who were members of his church and a relative. He is also facing charges of defeating the ends of justice for allegedly offering R25,000 to one of the victims for her to drop the charges.

As an adult, the woman said she still did not tell her mother.

Her mother only learned about the rape from neighbours after her cousin invited her to speak about the issue at a local radio station.

“The only time that my mother spoke about sexual matters with me was when she sat me down with my grandmother as I was starting my periods,” she said.