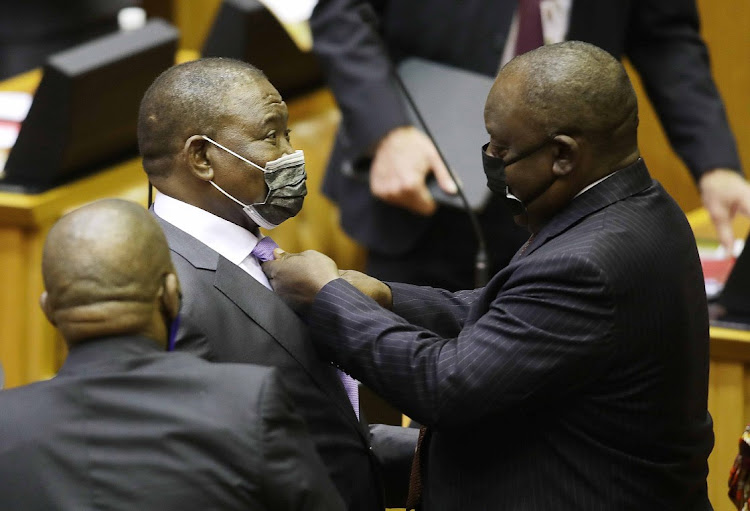 Finance minister Enoch Godongwana is having his tie fixed by President Cyril Ramaphosa ahead of his first medium term budget speech at parliament, Cape Town on Thursday.
Image: Esa Alexander

Better than expected tax revenue and slashing the infrastructure fund, that is how the government managed to scrape together R20bn to increase salaries of public servants.

Tabling his first medium-term policy speech, finance minister Enoch Godongwana said the government had found the R20bn in the fiscus but cautioned that the increasing public wage bill was unsustainable.

“To cover the increase in wage bills, the government will be using the high tax revenue it received to cover this,” he said.

“Government will use part of the higher tax revenues associated with the recent commodity price surge to narrow the deficit, while increasing non-interest expenditure to support economic growth, job creation and social protection, and cover the higher costs of the public service wage agreement.”

We will go hungry without Covid relief grant, say recipients

People relying on the R350 social relief of distress grant have expressed their frustration after finance minister Enoch Godongwana announced that ...
News
2 months ago

The 2018 wage bill agreement that deals with salary increases is currently before the Constitutional Court awaiting an outcome.

He said the fiscal outlook was highly uncertain, including the durability of the economic recovery plan, the legal process associated with public service compensation, and future wage negotiations.

Godongwana said should the outcome of the ConCourt judgment be in favour of unions and compel the government to implement it, the increases would have an adverse effect on the fiscus.

Meanwhile, the public wage bill accounts for 35% of the government's spending.

Economists were divided on the policy speech, with some calling it a balancing act and others agreeing with Godongwana that it was unsustainable.

Forget Kapingura, an associate professor in the economics department at Fort Hare University, said Godongwana's budget was a balancing act, adding that he attempted to give workers a salary increase as opposed to watching them take to the streets and bring the country to a standstill.

“It’s a bit of a challenge because some of the funds could have been channelled to projects that could be productive for the economy instead of paying salaries and become revenue generating projects.

“But also the government has to cater for the welfare of its employees. This will prevent strikes from happening and bringing the country to a standstill. It's a balance,” Kapingura said.

“The speech must be taken for what it is – it’s the government giving us pointers on how they're thinking and what they’re intending to spend money on,” Wait said.

“The wage bill has been stable at 35% of the budget for more than a decade. What has changed is that politicians, their friends and families have looted municipalities and SOEs to the brink of collapse.

“We demand that the government abandon an unhelpful four-year wage freeze and engage organised labour at the Public Service Central Bargaining Council on wage increases for workers,” Pamla said.

There have been ongoing calls from civil society and unions for the government to maintain the grant and use it to build towards a basic income grant ...
News
2 months ago

Finance minister Enoch Godongwana has not budgeted for an extension of the R350 social relief of distress grant beyond the March 2022 expiry date, ...
News
2 months ago

Commodities boom boosts tax revenue but it could be short-lived

“A surge in commodity prices has significantly improved the in-year revenue outlook, although its effect is likely to be temporary. Revenue ...
News
2 months ago
Next Article