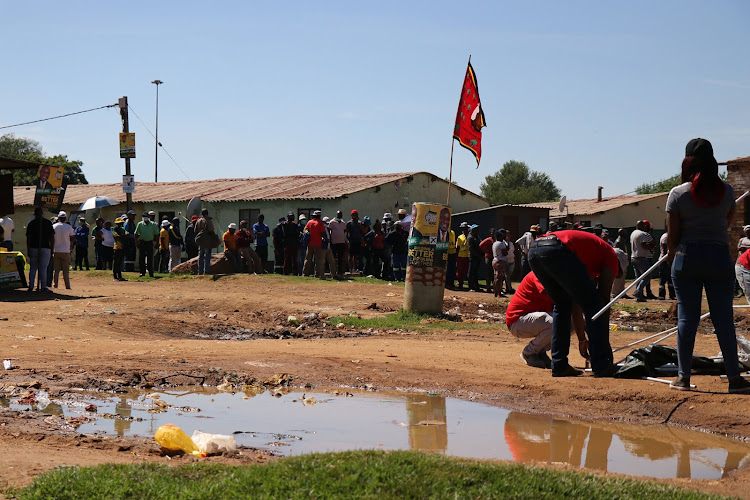 Residents of the troubled Emfuleni local municipality who cast their vote today say they are doing it for employment opportunities and to end service delivery failures.

Queues began building up in Sebokeng just as the polling stations were about to open at 7am. Most of the people who woke up early to make their mark were the elderly.

Nokufa Tsotetsi, 55, of Sebokeng, Zone 17, made his mark at the Moshate Secondary School.

“He must not just give job opportunities to the people on his street but to all the residents that are in the ward. Our children are not working. When there are projects, let all people get fair opportunities of work,” Tsotetsi said.

She has three children aged 30, 27 and 22. All of her children are not working and are dependent on her income as a domestic worker.

One of the very few young people that made his mark, Austin Moahluli said he was voting to see change.

“I work as a security officer in Emfuleni municipality. I have been working here for seven years but have seen no progress. I want to see myself being absorbed into the workforce of the municipality so that I can progress in life,” Moahluli said.

At Sebokeng Hostel the queues had become very long by 10 am. Voters, some in political party regalia stood outside the little hall holding umbrellas to protect themselves from the scotching sun.

Right in front them was garbage and pond of water, a reminder of the poor service delivery that the residents have experienced in the past five years in Emfuleni.

Khumshile Balekani, 56, who has been living in the hostel for over three decades said he wants to see the living conditions of residents improve.

Emfuleni has been under administration for about three years and service delivery collapsed.

Corrupt councillors will be sent to jail - Former Joburg mayor

"The President (Cyril Ramaphosa) made all councillors sign a pledge to clean out corruption in all municipalities."
News
1 month ago

Vincent Mahlangu’s struggles cut deeper than most people in his community.
News
1 month ago

Residents of Orlando in Soweto have vowed to vote, despite the lack of services in the area.
News
1 month ago

Deliver on your promises, mom and daughter tell political parties as they vote

Soshanguve residents who came to cast their votes at Nchuncheko primary school are complaining about service delivery.
News
1 month ago
Next Article