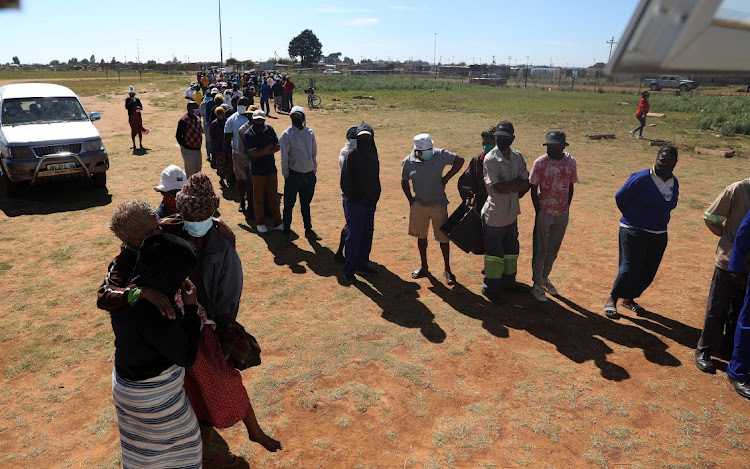 There was a delay for almost two hours to the start of voting at Thabo Mpempe primary school voting station in Boikhutso ward 3 as dozens of residents of the dysfunctional Ditsobotla local municipality in Lichtenburg in the North West, stood in long queues.

The voting station had not opened by 08:30am due to complaints by political party agents about the IEC presiding officer at the station.

As early as 6:30am, the residents of Boikhutso arrived at the voting station in high spirits on Monday morning ahead of the municipal elections.

Some dressed in their political party regalia, young and old people of Boikhutso came in their numbers to cast their votes. Some brought their own chairs as they waited for the voting station to open.

Party agents claimed that the presiding officer was instructed by the IEC not to preside over the election at Thabo Mpempe voting station because of how she mishandled the special voting process over the weekend.

Independent party agent Enock Voorby said: “The presiding officer did not seal the boxes of this station for the special voting that happened on Saturday and Sunday. The IEC informed her that she should not preside over today’s voting process.”

“We cannot start the voting process until we get a new presiding officer. We are waiting for the IEC to come sort out this issue,” said Bogatsu.

Voting has since commenced at the station.

The roads are in a state of disrepair, with potholes everywhere, while some roads that were once tarred have deteriorated into gravel due to a lack of maintenance.

One of Ditsobotla's biggest employers, Clover, announced in June that it would be moving its cheese factory from Litchenburg under Ditsobotla local municipality to Queensburgh in KwaZulu-Natal.

First time voters have appealed to their generation to to go to the polls in numbers.
News
2 months ago

Some of the elderly women who cast their vote on Monday morning in Seshego, Limpopo, have expressed sadness as they went to the polls for the first ...
News
2 months ago

DA mayoral candidate Mpho Phalatse who cast her vote at Sandton fire station this morning has described the local government elections as the biggest ...
News
2 months ago

As the sun rose on election day, the first person to catch the rays while waiting at the gates of Sedi-Laka Primary School in ward 92, Allandale, ...
News
2 months ago
Next Article