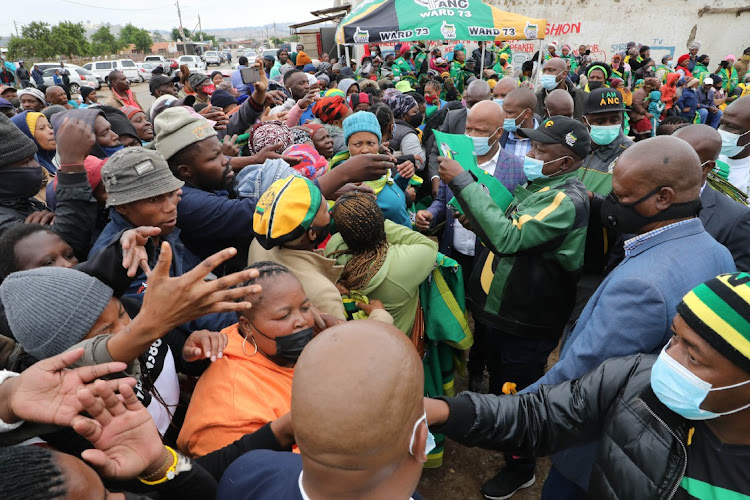 Deputy president David Mabuza says the ANC is concerned about the potential difficulty in reclaiming control of the Tshwane and Johannesburg metros.

Mabuza took the party’s elections campaign to Ekurhuleni on Tuesday where he visited several townships and galvanised voter support ahead of the November 1 municipal elections.

He visited Benoni, Etwatwa and Springs after which he said he was confident that the party would take full control of the metro.

“We are strong on the ground. Ekurhuleni is our best metro and we think we are going to win it,” he said.

Mabuza said the party has, however, not been having it easy in other metros as it tries to come back with a clear majority after next week’s polls.

“It has been tough. We are trying to push hard in Tshwane. Maybe, maybe we can win Tshwane. Johannesburg is a bit steep. We are going to put our last shot and move a bit faster. Maybe we can turn the situation around,” Mabuza said.

While many residents battled it out for the party’s regalia, which was distributed by ANC leaders, Mabuza and Ekurhuleni mayor Mzwandile Masina were also confronted by angry residents whose complaints ranged from failure to build houses for people who had been on the waiting list for decades as well as the party’s contentious candidate list process.

Mabuza reiterated that the ANC would sort out the candidate lists disputes after the elections, and pleaded with party supporters to rally behind  it.

Masina, however, warned those who threatened not to vote for ANC councillors that this would lead to them being more disadvantaged if the ANC lost power in their wards.

Deputy President David Mabuza has admitted ongoing load-shedding was worrying for the ANC because it had disrupted the ruling party’s campaigning ...
News
2 months ago

“If you don’t go and vote, and vote for the ANC, you will find yourself under another political party and there will be nothing the ANC can do to change your situation,” he said.

Residents, however, alleged that the ANC’s councillor candidate Jerry Moimana had been rejected by the community but that the party had smuggled him back onto the list.

Masina accused some of the residents of trying to embarrass the party’s leadership.

He also told the Chief Albert Sisulu informal settlement residents who complained about a lack of houses and other service delivery failures that the party was still dealing with the legacy of apartheid and colonialism.

“Your needs cannot be resolved in 27 years. If you don’t have that understanding, you don’t know what you are talking about. Every five years we must come back to you, but all the time we show you what we have been able to do,” Masina said.

Some of the residents who came from the newly developed houses in the area also complained that the municipality had failed to build tar roads, forcing them to walk on muddy streets every time it rained.

Mabuza’s presidential motorcade also had to make its way through the muddy streets as he embarked on a door-to-door campaign in the area.

Masina was, however, adamant that his administration had not slept on the job when it came to building RDP houses and providing other services in the metro, including electricity.

He said the metro had built more than 60,000 houses over the past five years.

Ekurhuleni mayor and ANC regional chairperson Mzwandile Masina has told disgruntled residents who complained over housing that the governing party ...
News
2 months ago

Zuma has done more than Mbeki and co. for ANC's election campaign

I hold the opinion that the ANC's brown sheep and former president Jacob Zuma has done more for the ANC's election machinery with his last two ...
Opinion
2 months ago

President Cyril Ramaphosa was forced to plead with disgruntled ANC supporters on Monday as they threatened to stay away from the polls due to their ...
News
2 months ago
Next Article