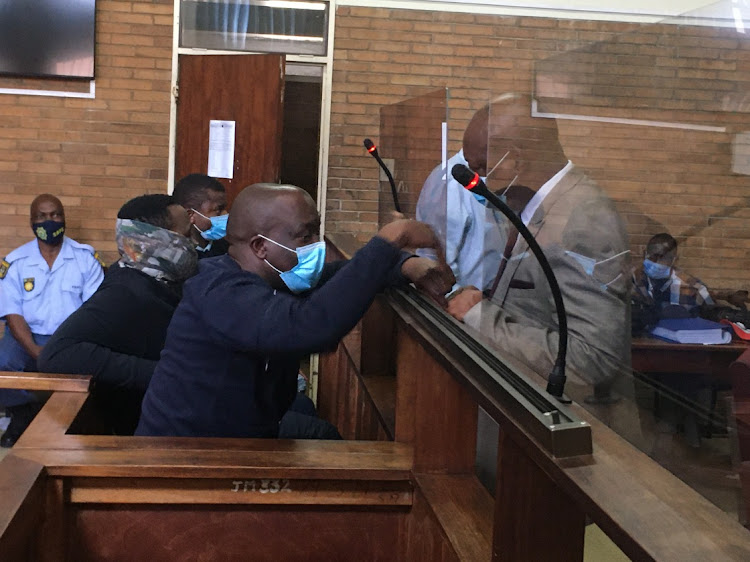 Former MEC is agriculture land reform and rural development, Mandla Msibi talking to his relative while he appears in the Nelspruit magistrates court.
Image: Mandla Khoza

Former Mpumalanga agriculture, land reform and rural development MEC Mandla Msibi will spend the weekend behind bars after judgment in his bail application was reserved for next week.

Msibi and his two co-accused Anele Mnisi and Njabulo Mkhonto appeared in the Mbombela magistrate's court where they stand accused of double murder of Dingan Ngwenya and Lindela Lubisi and attempted murder of Sfiso Mpila.

They were allegedly involved in the shooting of Ngwenya, Lubisi and Mpila outside Coyotes Chisa Nyama in Mbombela on August 22.

Msibi and his co-accused will remain in police custody until then.

A visibly disappointed Msibi was led back to the police holding cells after the court adjournment.

His lawyer advocate Coert Jordaan had earlier pleaded with the court for the judgment to be delivered earlier.

Jordaan argued argued in court that the state was being biased and choosing one side of the two ANC groups involved in a battle.

“The first statement of the two witnesses of the state came in on Aug. 26, where the incident happened four days before.

“Why would someone wait and not give the statement on something he/she saw on a very important case like this. We are of the view that the witnesses went to consult with the other group of the same political party on who to implicate or not,” Jordaan said.

“The state charged all the accused of two counts of murder and one attempted murder where on the testimony from the investigator Msibi is alleged to have shot the survivor on the leg. That is attempted murder. Mkhonto is only mentioned smashing a car which is malicious damage to property but yet they are all charged with murder.

“We would submit to this court that those matters be taken into consideration and the fact that the case is nonexistent and they have decided to choose sides on a political case.”

Msibi's supporters, who have been bussed to the court in numbers since his arrest, were also left disappointed but were called to remain calm.

Former Mpumalanga agriculture MEC Mandla Msibi will spend another night in custody as his bail application was rolled over to Friday.
News
9 months ago

The investigating officer in the double murder case against former  Mpumalanga MEC Mandla Msibi  has shed light into the shooting incident that ...
News
9 months ago

The Nelspruit magistrate's court where former Mpumalanga MEC Mandla Msibi is applying for bail has been evacuated due to a bomb scare.
News
9 months ago
Next Article