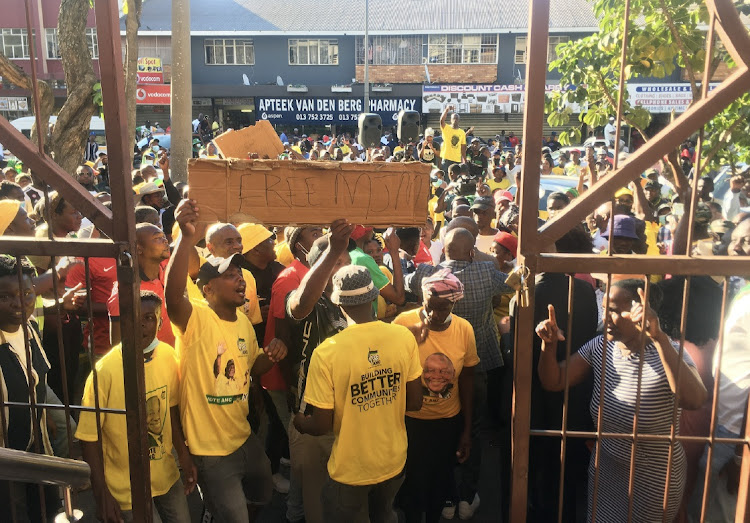 Supporters of MEC Mandla Msibi who is being charged with murder and attempted murder picket outside the Nelspruit magistrates court.
Image: Mandla Khoza

The investigating officer in the double murder case against former  Mpumalanga MEC Mandla Msibi  has shed light into the shooting incident that claimed the lives of two ANC members outside a popular joint in Mbombela.

W/O Boy Bhila told the Mbombela magistrate's court on Thursday that the shooting happened after arguments over the party's candidates list verification meeting that was held at  Nutting House Lodge, outside Mbombela.

He said a car belonging to one Mr Nkalanga was shot at and they called their group and went to the police station to open a case.

Bhila said Dingane Ngwenya, Sindela Sipho Lubisi and Sfiso Mpila went to Coyotes Shisa Nyama where they were shot at by a group of 15 people.

“According to my witnesses, a group of plus or minus 15 people attacked the three [Ngwenya, Lubisi and Mpila] while they were in the car parking lot. They tried to run for their lives, but Ngwenya and Lubisi fell down while Mpila managed to run away, but accused number three [Msibi], according to my witness, shot him in the leg,” said Bhila.

Mpumalanga MEC Mandla Msibi to spend another night behind bars

Mpumalanga agriculture MEC Mandla Msibi will spend another night behind bars after his case was postponed in the Nelspruit magistrate’s court on ...
News
9 months ago

He said  Mnisi was also seen picking up cartridges at the scene.

He said the accused must not be released on bail because their lives were in danger due to infighting in the ANC.

Bhila said there were two groups fighting in the party, and releasing Msibi, 45, Njabulo Mkhonto and  Mnisi on bail would be putting their lives in danger as “politicians seek revenge”.

“If released on bail, it will not be right, the accused’s lives are in danger. As the police, it is our duty to protect people but police cannot protect someone 24/7. Number two, we also don’t know what the families of the deceased think or would do [to them]. This matter involves politicians and politicians like to  [seek] revenge,” said Bhila.

Police said on September 17 2021, they arrested Joseph Charlie Ngwenya, 35, and Tshepo Matsane, 30. They both appeared in court at least twice before being granted bail of R20,000 each on October 8.

Outside the court, thousands or Msibi’s supporters chanted and sang Struggle songs, calling for  his release.

Police used barbed wire to blockade Bester Street from the Mbombela police station  to the court.