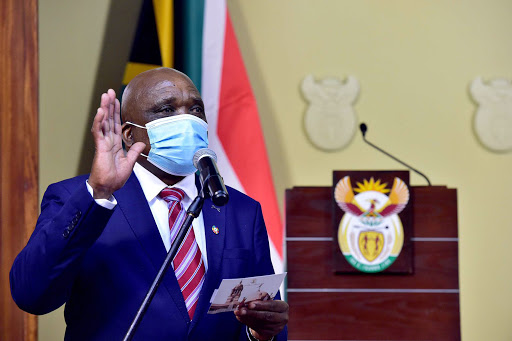 Health minister Joe Phaahla has apologised “unreservedly” to the nation for the controversial Digital Vibes saga that will result in the precautionary suspension of officials by the end of Thursday.

“We would like to assure the public that we are going to thoroughly and decisively act to ensure nothing is swept under the carpet. We acknowledge the impact of this on the image of the department and public health system to provide quality healthcare services,” said Phaahla.

He was reacting to the findings and recommendations by the Special Investigating Unit (SIU) in a report on the Department of Health awarding a National Health Insurance and  Covid-19 communications tender to Digital Vibes.

The report into the controversial R150m communications tender was submitted to President Cyril Ramaphosa in June. It was released to the public on Wednesday.

Earlier Phaahla announced that seven officials would be placed on precautionary suspension by the end of Thursday. He clarified that media reports about 18 people being implicated included people who were not employed by the government.

Those outside the department but in government included Reginald Ngcobo at the Department of Agriculture, Senzeni Ngubane from the Government Communication and Information System (GCIS) and Ian van der Merwe at the Government Printing Works. “The national department of health has been able to deal directly with the disciplinary process of six officials implicated in this investigation report,” said Phaahla.

“By the close of business today, all affected ... officials in the Department of Health would be served with suspension letters pending the completion of disciplinary hearing processes and formalisation of charges. The outstanding disciplinary investigations will require the investigators communicating with the SIU and with a procurement specialist.”

He said acting director-general Dr Nicholas Crisp had written to the implicated officials informing them about action taken by the department.

Blacklist them: SIU says state should not work with Digital Vibes again

The Special Investigating Unit says evidence justifies “the blacklisting of Digital Vibes from conducting business with the public sector”.
News
10 months ago

Phaahla said the report showed that “indeed whistle-blowing is one of the effective mechanisms in the fight against fraud and corruption.

“We fully understand the public concerns and interest in this matter because it involves allegations of misappropriation of public funds in the middle of the fight against a Covid-19 pandemic, which has so far cost the country substantial unbudgeted funds, as well as people's lives and livelihoods. Thus, we are committed to study the report’s findings and recommendations fully, and act on the outcomes of the formal disciplinary processes without fear, favour and prejudice,” he said.

He said the department was implementing precautionary suspensions because it was awaiting the formal processes. “It does not help when there is a lot of suspicion on the people who must run this system so we want to assure the public that we will do everything possible to correct this.

“This kind of development demoralises the honest and hardworking public servants working in the health system,” he added.

I didn't ask for Digital Vibes money, my messenger did — Mkhize

Former health minister Dr Zweli Mkhize went against a cabinet decision on communications work on the NHI and approved budget amounting to R132m for a ...
News
10 months ago
Next Article