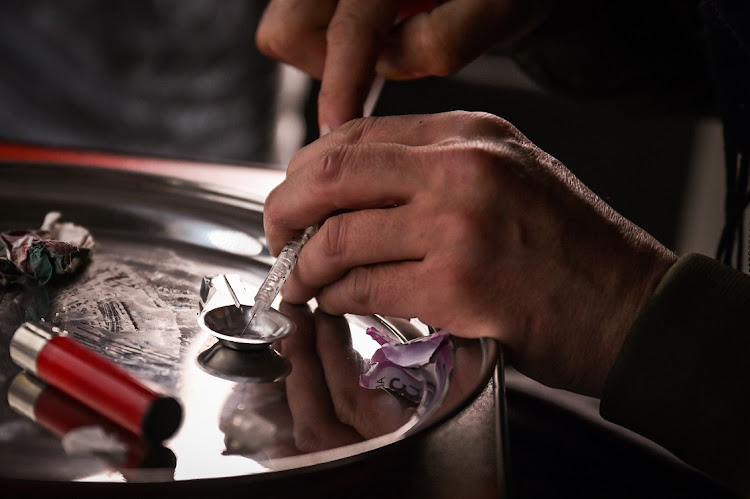 According to an Interpol notice, Zimbabwe is primarily a transit country for cocaine but recent evidence indicates that there’s a growing market for the drug.
Image: Reuters/ Jeff J Mitchell/Getty Images

A South African was on Tuesday jailed in Zimbabwe for trafficking drugs worth R600,000.

Shila Khumalo, 50, a Johannesburg resident, was convicted of dealing in dangerous drugs by Harare magistrate Munamato Mutevedzi. Her initial charge was for possession, but because of the quantities involved, it was upgraded.

Khumalo had pleaded not guilty,

She was handed a 12-year sentence of which two years were suspended on condition of good behaviour.

It was the state’s case that police acting on a tip-off arrested Khumalo on May 10 this year at the Robert Mugabe International Airport.

Khumalo was travelling from Brazil where the drugs were sourced and was in transit to SA aboard an Ethiopian Airways plane. When her luggage was searched, sachets of cocaine were discovered in her luggage and to conceal the crime, she swallowed 60 plastic balls (weighing about a kilogram in total) of the substance.

While in police custody Khumalo passed the bulk of the swallowed drugs before she was formally charged in court.

Khumalo’s arrest in May drew the attention of President Emmerson Mnangagwa, who declared war on drug dealers.

“Unbecoming trends such as the alarming entry of destructive drugs into our jurisdiction, threaten the fate of our youth. My government will thus continue to take stern measures to stamp out this growing threat,” he said.

During cross-examination, a Zimbabwean doctor, Clancy Nyamukure outlined that cocaine in Zimbabwe was found in “higher” social classes and is peddled through cartels.

Khumalo is second person in a space of two weeks to be arrested at the airport. The first was a Brazilian, l Guilherme Alverez Da Silveria, 32, who also an Ethiopian Airways flight. He was attempting to smuggle 4kg of cocaine.

According to an Interpol notice, Zimbabwe is primarily a transit country for cocaine but recent evidence indicates that there’s a growing market for the drug.

But with high unemployment and worsening levels of poverty, the majority of drug abusers in Zimbabwe are hooked on crystal meth. The drug is relatively new in the country and it’s “dangerously cheap” with a shot having a street value of US$3 per sachet while the same quantity of cocaine costs more than US$100.

Customs officers have seized 67 pieces of calcium hydroxide used to produce crystal methamphetamine, commonly referred to as “ice” or “tik”.
News
4 months ago

“You stay in a shack. You applied for a house since 1994 but you continue to vote for the ANC. Are you well in the head?” Malema asked.
News
4 months ago

The deaths of two pupils in Alexandra allegedly at the hands of fellow learners have raised the spectre of violence, drug use and even gangsterism ...
News
4 months ago
Next Article