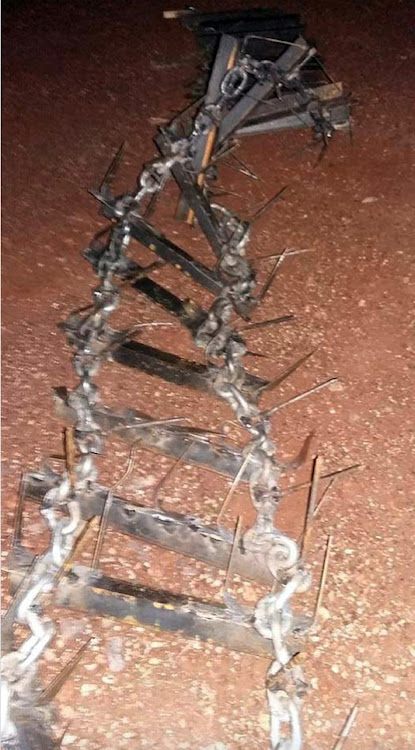 Motorists making use of the N1 and R101 roads between Polokwane and Kranskop Toll Plaza are cautioned to be vigilant of criminals placing spikes on the road, intending to rob them.
Image: Supplied

Limpopo police spokesperson Brig Motlafela Mojapelo said motorists making use of the N1 and R101 between Polokwane and Kranskop Toll Plaza are cautioned to be vigilant of criminals placing spikes on the road, intending to rob them.

This after three similar incidents took place in the Mokopane policing precinct from August 21 to 22.

“Sharp objects are reportedly placed by the criminals on the road, resulting in motorists experiencing punctures and being forced to stop to change tyres. The victims are then robbed of their belongings at gunpoint.”

He said three cases of armed robbery were opened over the weekend when motorists and passengers were attacked and robbed.

One of the incidents took place along the R101 on Saturday night, when the victim’s vehicle experienced a puncture as a result of the spikes. While changing the tyre, three suspects emerged and fired shots. They then forced the victim and his wife into to the bushes and robbed them of cellphones and bank cards. The victims managed to escape with minor injuries.

The other two motorists were separately attacked on the N1 on Saturday and Sunday after experiencing punctures as a result of spikes on the road. As the victims were changing the tyres, the suspects emerged from nearby bushes and threatened them with pistols and a rifle. They were then robbed of cash, cellphones, laptops, bank cards and clothes.

Provincial commissioner Lt-Gen Thembi Hadebe has ordered the police to intensify patrols on major routes “to ensure that these criminals are arrested to face the full might of the law”.

Police in inland provinces are on high alert on the national roads following a spate of robberies in which spikes are placed on the road surface to ...
News
11 months ago
Next Article