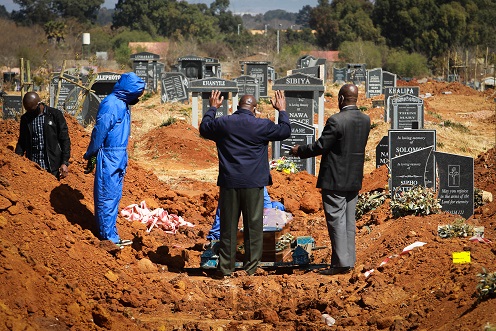 The city of uMhlathuze in northern KZN has been inundated with burials due to Covid-19 related deaths.
Image: Sebabatso Mosamo

The first week of 2021 produced an all-time record number of deaths in SA, the Medical Research Council (MRC) said on Wednesday.

These are deaths in excess of the number predicted based on trends over the past two years.

The two successive weekly records coincide with a surge in Covid-19 infections caused by a highly-infectious variant of the virus which has officially claimed the lives of 34,334 South Africans, as of Tuesday.

The burden of disease research team at the MRC, which compiles the weekly reports, said on Wednesday that during the week of December 30-January 5, the 10,907 deaths from natural causes exceeded the predicted number by 131%.

In the same week, deaths officially recorded as due to Covid-19 totalled only 2,491, but since excess deaths were first noted in the Western Cape on May 6 2020, they have consistently outnumbered official Covid-19 deaths by a factor of between three and four.

“During the period May 6-January 5, there have been a total of 83,918 excess deaths from natural causes of persons 1+ years old,” said the MRC team, pointing out that this calculation was based on a baseline that assumed lower mortality during lockdown.

More than 200 deaths were recorded in both Gauteng and KwaZulu-Natal, as SA passed the 34,000 mark in terms of Covid-19 fatalities.
News
1 year ago

Deaths from natural causes increased in all provinces in the first week of the year, but the MRC said particularly sharp rises were recorded in KwaZulu-Natal, the Western Cape and Gauteng.

In KwaZulu-Natal, excess natural deaths “reached a record high of 3,389, more than double the peak of the first wave of 1,306 deaths”, said the researchers. This is 220% higher than normal.

The Western Cape had an excess of 1,432 natural deaths, 193% higher than normal. “There are indications of a slowdown in the increase, but the number of deaths has not yet turned and is more than double than the peak of the first wave (601)," said the MRC.

A three-week spike in excess deaths in Gauteng culminated in a total of 1,712 in the week under review.

In the Eastern Cape, the rate of increase was lower and the MRC said deaths from natural causes in the province “may be showing the early signs of turning”.

It added: “The number of deaths in the second wave is considerably higher than the number of excess natural deaths that occurred in the peak of the first wave in the province (1,597).

“Natural deaths in Nelson Mandela Bay have continued to decrease and the second wave in Buffalo City has turned.”

And unnatural deaths fall *dramatically* in the week following the banning of alcohol sales. (Title of figure incorrect; goes up to 5 Jan 2021) pic.twitter.com/0EBSz1acIz

After President Cyril Ramaphosa's announcement of a reimposition of the ban on alcohol sales, deaths from unnatural causes — such as homicide or road accidents — plummeted below the lowest prediction based on historical patterns.