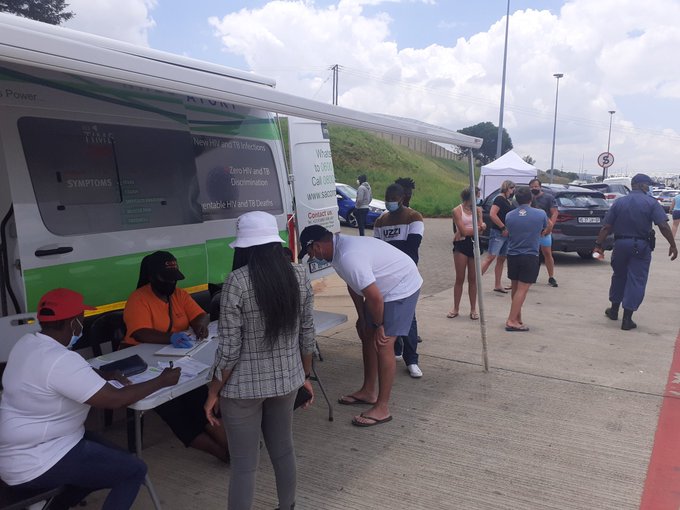 People queuing for testing at the Gasmere tailgate on the N1.
Image: Penwell Dlamini

Rapid testing for Covid-19 has begun on the N1 near the Grasmere toll plaza as motorists return to Gauteng after the December holidays.

Health experts have warned that the number of infections could spike in Gauteng as people return from hotspot areas across the country. As motorists exit the toll gate, they are screened and those with symptoms are offered free Covid-19 testing. As many as six testing stations have been set up on the side of the road.

"We are prioritising people from the hotspots. As you can see we cannot test everyone who is coming through the tollgate. People with symptoms are offered testing," said Gauteng health spokesperson Kwara Kekana.

Voluntary testing is being offered as part of provincial government's plans to address the second wave of Covid-19 infections. On the side of the road there is also free HIV testing and condoms are being distributed. As of tomorrow at the same spot, immunisation of children who have missed their dates will be offered.

Police are also checking vehicles for alcohol and other road infringements.

Similar operations are expected to be conducted on the other main arteries coming into the province such as the N3, N12 and N1 from Polokwane, Limpopo.

Government should avoid extending the current lockdown regulations as the impact will be more devastating to the economy than last year.
News
1 year ago

The deadly Covid-19 outbreak has not only taken lives but has deprived the world of enjoying shared moments at festivals, concerts and sports events. ...
News
1 year ago

A rapid Covid-19 home testing kit has been approved by the Food and Drug Administration (FDA) federal agency in the US and may be available for use ...
News
1 year ago
Next Article