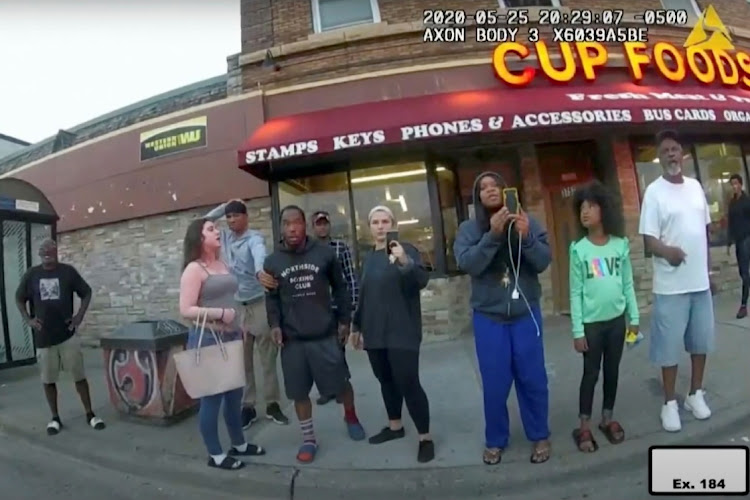 Darnella Frazier (3rd R) uses her mobile phone to record the arrest of George Floyd, in a still image taken from Minneapolis Police body camera video in Minneapolis, Minnesota, U.S. on May 25, 2020. The Pulitzer board said it was awarding a "special citation" to Darnella Frazier, the teenaged bystander who recorded video of Floyd's murder on her cellphone.
Image: Minneapolis Police Department/Handout via REUTERS

A teenager who recorded the murder of George Floyd in a clear and unrelenting single shot with her cellphone was recognized on Friday by the arbiters of the highest honors in U.S. journalism.

The Pulitzer Board awarded Darnella Frazier a special citation for a video she said has haunted her ever since, showing Floyd's death beneath the knee of Derek Chauvin, a white Minneapolis policeman. Chauvin was convicted of murdering Floyd in a trial during which Frazier's video was played repeatedly.

The citation at the 2021 Pulitzer Prize ceremony is a rare instance of the board recognizing the journalistic achievement of someone with no professional experience in the field, a striking distinction in the genre sometimes known as citizen journalism.

Frazier, 18, was recognized for recording a "transformative video that jolted viewers and spurred protests against police brutality around the world," Mindy Marques, co-chair of the Pulitzer Board, said at Friday's online announcement ceremony.

Frazier's video shows Chauvin kneeling on the neck of Floyd, a 46-year-old Black man in handcuffs, for about 9 minutes while arresting him on suspicion of using a fake $20 bill on May 25, 2020. Floyd begs for his life before dying on the Minneapolis road.

Former Minneapolis policeman Derek Chauvin was convicted on Tuesday of all three charges of murder and manslaughter in the deadly arrest of George ...
News
5 months ago

Frazier has rarely discussed the video she made, but she testified for the prosecution at Chauvin's murder trial this year, where members of Floyd's family were sometimes seen averting their gaze each time her video was replayed.

She told jurors that she was taking her nine-year-old cousin to buy snacks when she saw "a man terrified, scared, begging for his life," and so pulled out her cellphone and hit record. She uploaded the video to Facebook later that night, where it would be watched by millions of people around the world.

Chauvin is due to be sentenced on June 25.

Frazier could not be reached for comment on Friday, and a lawyer who represented her during the Chauvin trial did not respond to an email seeking comment.

Her video is widely credited with bringing attention to a police killing that might otherwise not even have made the local news. It has been compared to the similarly galvanizing videos made by George Holliday in 1991 of Los Angeles police beating Rodney King, a Black motorist, and by Ramsey Orta in 2014 of a New York City policeman killing Eric Garner, a Black man, with a banned chokehold.

The Pulitzer Board called Frazier an example of "the crucial role of citizens in journalists' quest for truth and justice."

"She is fittingly worthy, placing her in the company of past recipients, like Ida B. Wells," he said, referring to the pioneering Black journalist.

Even before Friday's awards ceremony there was speculation that Frazier's video might be recognized. In December, it earned Frazier the 2020 Benenson Courage Award from PEN America, presented to her by the filmmaker Spike Lee.

On the first anniversary of Floyd's murder, Frazier wrote about the lingering trauma in a message on Facebook.

"A lot of people call me a hero even though I don't see myself as one. I was just in the right place at the right time," she wrote. "Behind this smile, behind these awards, behind the publicity, I'm a girl trying to heal from something I am reminded of every day."

She had walked to Cup Foods hundreds of times before May 25, 2020. That day, Darnella Frazier made a cellphone video that convulsed a nation: a ...
News
5 months ago

Prosecution witnesses described in searing detail their horror in watching the final moments of George Floyd's life as they testified against Derek ...
News
5 months ago

Former Minneapolis police officer Derek Chauvin asked a judge on Wednesday for probation after being convicted for the murder of George Floyd, while ...
News
3 months ago
Next Article