People in KwaZulu-Natal’s impoverished south coast towns were reeling after the devastation of the riots, but are hoping to forge a collective way forward 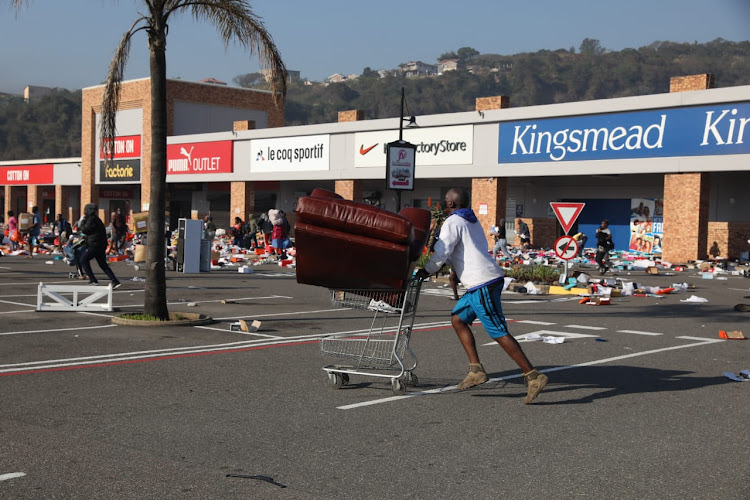 “We may see ourselves as divided, but we aren’t as far apart as we think,” says Shaun Stephen, a quiet, considered man talking about the rebuilding initiative in Umzinto.

About an hour south of Durban and 12km inland from the seaside town of Scottburgh, Umzinto was almost destroyed during the recent riots and looting.

“The progress has been fantastic because the need to recover is so urgent. We have organised diligently and stood together. It is amazing to see how fast the town is on the way up again.”

We’re getting to know one another better and that erodes suspicion. I’m hopeful

When the riots and looting broke out, Stephen, a businessman who grew up in Umzinto, rushed back from Johannesburg to the trading village he calls home.

To outsiders, Umzinto is probably not worth a visit. It’s not picturesque by any stretch of the imagination. It consists of little more than a new strip mall and a main street jam-packed with tatty retail stores, a post office, government offices and schools.

Perched atop a hill overlooking the town is a historic Catholic church and on the steep, twisting road descending past the graveyard, you catch glimpses through the headstones of a shack settlement and a taxi rank.

While it might not look like much, Umzinto has a long history as a rural economic artery serving outlying towns including Mandawe, Dududu, Esperanza and Sezela as well as those too impoverished to shop in Scottburgh. More than 150,000 people rely on the town.

"Talks alone are not going to help. There needs to be a willingness from the government side to address the imbalances in the economic sector as it ...
News
11 months ago

Opposition MP Narend Singh said outsiders might not appreciate the economic significance of south coast towns like Umzinto nor how long it would take them to recover from the damage.

‘I don’t know how I will recover’

Umzinto was devastated by the riots. Residents there and in nearby Umkomaas said outliers came first with spray paint and matches. They robbed ATMs, eulogised former president Jacob Zuma with graffiti and lit fires. These actions sparked general looting.

“This was not random,” said Stephen.

“It was the same modus operandi in towns all the way from Highflats down to Umzinto, but Umzinto was particularly badly affected.”

“F**k the police” and “Zuma” was painted in black on shops near the Umkomaas taxi rank, close to where Asif Razar ran a general dealer before it was gutted.

“Fifteen years of my hard work is gone,” Razar said.

“But I must carry on. I have to pay my rent. I have to feed my wife and two children. We have no insurance, but we help each other.”

Fakir Amin is a Pakistani migrant who has called Umzinto home since 2003 and ran a cellphone shop that was destroyed.

Like Razar, Amin started trading again in the smouldering embers of his shop.

“It is going to take a long time to rebuild this town, but I’ve seen people come in from all over to clean up because they need the town. People are poor, but they are also outraged and embarrassed by the looting and destruction.”

Mzizi said the impact was profound. Businesses without cash flow and stock were looking to insurance companies but were unsure if they would be helped.

While the rebuild is under way for many, Mzizi said some will not recover.

“People are distraught. It is really sad. For them it is economic collapse.”

Migrant and trader Yugie Yu and his brother John watched in horror as their clothing store burnt to the ground. They built up their business over 15 years and saw it reduced to ashes in a matter of hours. Stock worth R5m was destroyed.

Three Phoenix men who face murder charges after civil unrest in parts of KwaZulu-Natal last month have abandoned their application for bail.
News
11 months ago

“Every night I can’t sleep,” said Yu, whose family had to be taken in by good Samaritans because their flat adjoining their shop was also razed.

“Everyone was so scared. There was no security and we had to run and hide. Now there is not much and people have to pay higher prices or drive far to shop.”

Two days after his store was destroyed by looters, octogenarian Mohamed Kadwa was armed with a trowel and rebuilding.

“I’m an old man. I’ve lived here my whole life and I thought I had seen it all until this.”

He cannot understand what happened.

“There’s no tension in this town. It’s too small for conflict. People have grown up together. We have to carry on. What else are we going to do?”

While Kadwa was rebuilding, up the road five youngsters stood guard outside the partially destroyed new mall that is the toast of the town. Justin Trion, Tino Chindowe, Lindo Ngcobo, Brian Bhengu and Andile Mtolo are all in their 20s and most are studying outside Umzinto.

They were disgusted by the mayhem and echoed Mzizi’s sentiments that locals were ashamed that this happened in their town. They are convinced outsiders instigated the riots.

“Of course it was planned,” said Chindowe.

“People got messages before. I understand people without food will steal. But why burn? Now we can only buy a few things or we travel to Scottburgh and that is expensive.”

The riots and ruin have deeply affected their families, the men said.

“Our parents are stressed,” Trion said, “but we all came to town to help clean up.”

Chidowe said: “We cleaned up with people we never really knew so it brought us together and it gives us some hope. The economy of this town is critical.”

Stephen said many Umzinto locals are fifth-generation traders and wholly invested in the town’s recovery and protection. Before the riots, “well-dressed strangers driving smart cars” were spotted mingling with known criminals, something unlikely to happen again without someone sounding the alarm.

He said the unity forged in the rebuild is heartening but not extraordinary.

“The town is historically typical of most small South African towns. There is a hangover of racial separation and cultural differences, but it’s small so the divide isn’t pronounced.

“There is a strong religious element and commitment to charity. People know one another. They have to work together. The town is in their DNA.

The KwaZulu-Natal premier said posts and posters were circulated on social media alleging a total shutdown would happen on August 23.
News
11 months ago

“There are racists and an ignorant few, but the way people got over the carnage was a concerted effort. It brought people closer, some because they want to guard against the threat of this happening again. Others want to engage about how we improve services. To make it work, we need to be a collective.

“The community and aid organisations, individuals, municipal officials, interfaith groups and the alumni of Umzinto have expedited relief aid in the form of food, medical and sanitary aid. Everyone responded effectively to help the poor and unemployed. Everyone matters, every contribution helps, everyone benefits when we work together,” Stephen said.

“We build on that spirit. We’re forced together by this. We’re getting to know one another better and that erodes suspicion. I’m hopeful.”

Singh welcomed the interaction between residents.

“I wish such dialogue had taken place before the unrest, but better late than never. The area of Umzinto, within Umdoni municipality, has deteriorated tremendously in terms of upkeep of infrastructure. It will take a concerted effort by the municipality and the confidence of the businesspeople to restore it to some semblance of normalcy.”