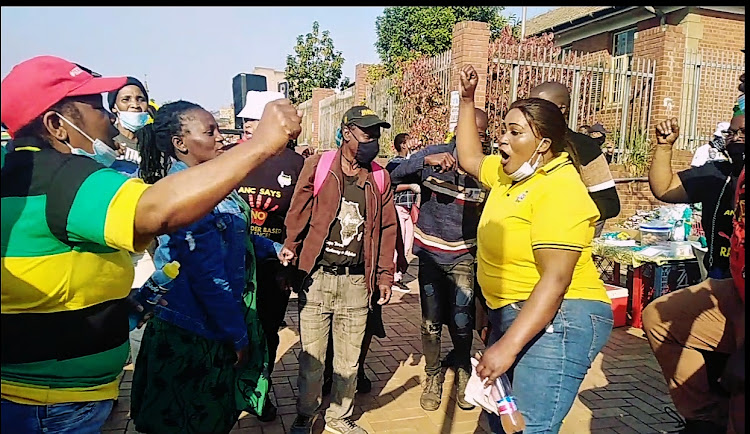 A police task team member assigned to investigate civil unrest, violence and deaths in Phoenix revealed in the Verulam magistrate’s court on Tuesday details of how three men allegedly attacked a group of men resulting in the death of one of them last month.

State witness Det Sgt Siphosenkosi Shezi gave evidence in the case against brothers Dylan, 29, and Ned, 30, Govender, and Jeetendra Jaikissoon, 39, who all appeared before magistrate Irfan Khalil on a murder charge on Tuesday. Dylan also faces an attempted murder charge.

The court heard affidavits from the three suspects who have denied the murder charge or that they participated in racial unrest or attacks.

The appearance came as police minister Bheki Cele and KwaZulu-Natal premier Sihle Zikalala provided an update on Tuesday about the status of the violence in Phoenix, with Cele saying that 36 people had lost their lives.

Advocate Kessie Naidu, appearing for the Govender brothers, said they were patrolling along a main road in Phoenix on July 12 when they were informed that a group of residents from the informal settlement of Zwelisha were headed towards their homes.

The brothers said they were concerned and went to check on the safety of the family, property and business. Dylan was armed with a gun and Ned had a stick.

They said there were confronted by a group of about 30 men who attacked them, forcing them to defend themselves. Dylan fired a warning shot to control the scene which was like a “war zone”.

In motivation for bail, the brothers said they wanted to save their family business, a road signs and graphic design company established in 2015, which also created five jobs. According to their statement, they work as joint managers for the branding company, which is located opposite their home in Palmview, Phoenix.

The Govender brothers, who both have medical conditions, outlined a number of reasons why they should be granted bail, including the harsh conditions they would face in a correctional facility while awaiting their trial dates.

Jaikissoon’s attorney Chris Gounden submitted his client’s affidavit in which he denied any involvement in the attacks and unrest that took place in the area recently.

About 152 firearms belonging to four private security companies operating in Phoenix, KwaZulu-Natal, have been seized for investigation following ...
News
9 months ago

He added that Jaikissoon merely acted to protect his family and his uninsured vehicle — which was parked across from his home — on July 12, when he heard a commotion outside his house at about 10am.

Shezi told the court that he and his partner responded to a call in Palmview, where witnesses directed them to an address after telling them that someone had been killed.

“When we arrived, we discovered that there is a home which had cameras which were facing in the direction of the incident.”

Shezi said he spoke to the homeowner, a woman who had video footage of the incident and she played it for him, while his partner recorded it. He said the video footage supported witness statements and the three accused were in the footage.

According to the policeman, the footage showed a group of about five unarmed black men walking past a home when a Ford, containing two Indian men, stopped alongside them, and the men dispersed.

Immediately, a second vehicle, a bakkie with about seven or eight Indian men arrived. The group of black men then came under attack from various men who were armed with a range of weapons including golf clubs, pangas, sickles and guns.

Shezi said footage showed that Dylan had a gun, while Ned had a pick handle and Jaikissoon was armed with a bush knife.

“As they were fleeing, their way was blocked by the white vehicle and they were outnumbered. As one of the victims slipped and fell, one of them exited the car and approached him. He then stood astride and shot him in the face.”

When asked if the three men deserved bail consideration, Shezi said: “They all played a big role in preventing the deceased from escaping. Unfortunately one of the witnesses who survived is unable to walk and is basically crippled. I felt upset that the suspects are misleading the court.

“In my years as a policeman I have never seen a person brutally murdered in that manner. They were unarmed, apologising and asking for forgiveness,” he said.

The case was adjourned to Wednesday to allow Naidu to continue cross-examining Shezi.

Heavy police presence outside the Verulam Magistrates court this morning - where 3 suspects arrested in connection to the unrest in #Phoenix will be appearing. #Court@TimesLIVE pic.twitter.com/qNBkTfKsfn

Outside court, tensions ran high as groups gathered in support of victims killed in Phoenix during the unrest called for “just and fair” proceedings.

Makhosi Shinga, chairperson  of the ANC's ward 60 women's league, said they had come to show support to families who lost their lived ones.

“We are here today to ensure that the Indians who killed our family members are punished and denied bail because we have really suffered. Family members are inconsolable and have put pressure on us as the branch leadership to act. We want there to be fairness and no racism,” said Shinga.