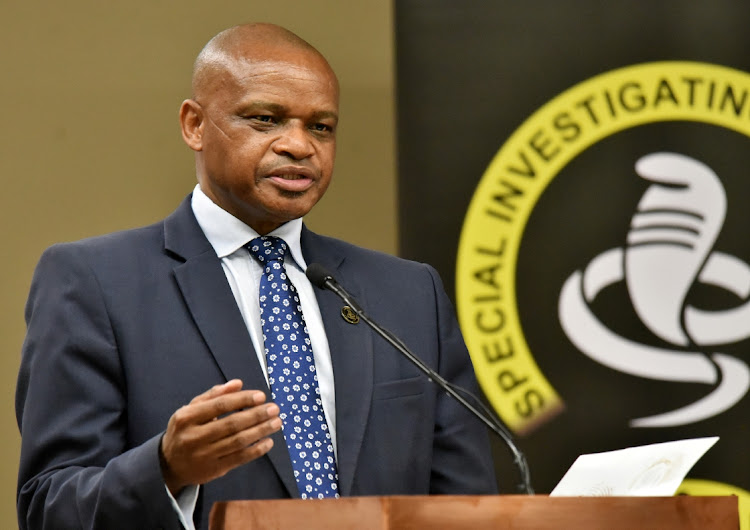 SIU head Andy Mothibi has told a meeting of black business leaders that his unit has found irregularities in the manner the contract of Digital Vibes was procured.
Image: Freddy Mavunda

The Special Investigating Unit (SIU) said it is pleased with the speed and turnaround time it took to conclude its investigation into the controversial Digital Vibes contract.

Speaking at a Black Business Council webinar on ‘The Fight Against Corruption’ on Friday, SIU head Adv Andy Mothibi said they managed to find irregularities with how the contract was procured.

“The issues relating to the national department of health and the procurement of a contract by a company called Digital Vibes have been investigated as speedily as possible and we believe the turnaround time in that investigation was satisfactory. We have reached the outcomes that we have reached and I can just really say that we have found irregularities in the manner in which that contract was procured,” said Mothibi.

According to SowetanLIVE's sister publication Business Day, the SIU, which seeks to recoup millions of rands spent on the Digital Vibes contract, has accused health minister Zweli Mkhize of unlawful improper conduct for his role and wants to recover almost R4m from his family.

The DA wants President Cyril Ramaphosa to make public an investigation report on health minister Zweli Mkhize and his involvement in an alleged ...
News
10 months ago

The standing committee on public accounts on Tuesday told parliament the presidency has asked the Special Investigating Unit to provide further ...
News
10 months ago

Business Day reported that in court papers filed in the Special Tribunal on Thursday, the SIU asked for the R150m contract reviewed and set aside and for those implicated to be ordered to pay the SIU or the department of health money they received with interest.

Mothibi confirmed that the Digital Vibes matter is before the Special Tribunal but would not comment publicly on the merits of the case.

“And that is why we are at court. That’s why we are at the Special Tribunal as of yesterday to cancel the contract and seek to recover the monies that have been paid out. In terms of other outcomes, I am very constrained by legal considerations and legal risks that are attached to the matter as it is pending in court.

Mothibi said they want to give president Cyril Ramaphosa the opportunity to study the final report and make his pronouncements.

The SIU investigated the awarding of a R150m communications contract to Digital Vibes by the health department for work that was related to the proposed National Health Insurance. The contract was later extended for projects on the Covid-19 pandemic.

Mkhize is alleged to having personally benefitted from the awarding of the contract. But he has consistently denied benefiting in any way from the Digital Vibes deal. Last month Mkhize went on special leave pending the finalisation of the SIU’s investigation.

Some of the monies that were paid to a company at a centre of a corruption scandal within the health department were being moved to family members ...
News
10 months ago

We want to see looters prosecuted

We welcome the announcement made by the Special Investigating Unit on Wednesday that it has sought and obtained the go-ahead to freeze the bank ...
Opinion
10 months ago
Next Article