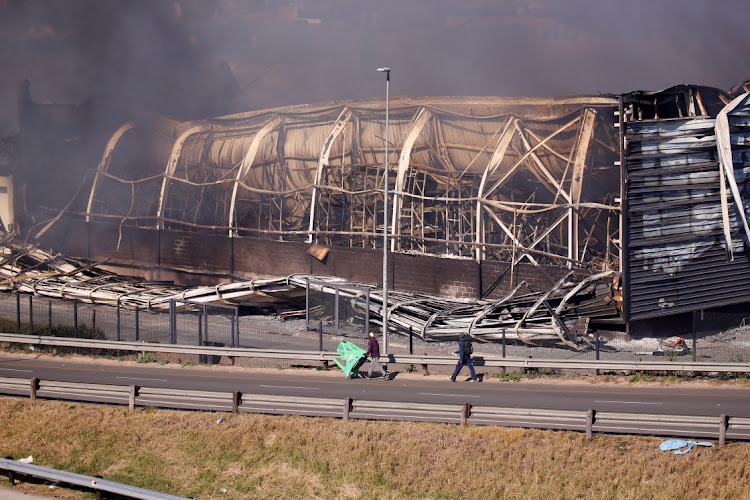 Businesses and home owners who have Sasria cover will have their legitimate claims met, and in the case of smaller claims, they will be paid out within a week.
Image: REUTERS/ROGAN WARD

Businesses and homeowners who have Sasria cover will have their legitimate claims met, and in the case of smaller claims, they will be paid out within a week.

That was the undertaking from Sasria (the SA Special Risks Insurance Association) MD Cedric Masondo on Monday.

The state-owned entity provides cover for loss or damage to insured property as a direct result of civil unrest, including rioting, strike action and public disorder — and it’s the only SA insurer that does so.

Sasria does not do direct business with the public, but is included in most commercial and consumer insurance policies.

On its website Q&A, the association states: “Sasria cover excludes theft. Looting is not a stand-alone Sasria peril and will only be considered as a valid claim in terms of Sasria if it occurs during an active Sasria peril for which Sasria accepts liability.”

Asked if Sasria will pay out claims from businesses and consumers relating to looting at this time, Masondo told TimesLIVE that while criminality may be at play in many cases, “the trigger was what we call civil commotion” — so the claims will be honoured.

“Our clients won’t have to go to great lengths to prove that there was a link between their loss and a civil commotion,” Masondo said.

But some people are questioning the state-owned entity’s ability to settle the claims.

“I suspect Sasria will struggle to settle claims of this magnitude,” tweeted @Gianicos1. “They were struggling to process claims even before this.”

Responding, Masondo said Sasria had more than sufficient reserves to meet the claims.

“I understand the concern, given that we are a state-owned company,” he said. “I don’t take offence, but Sasria has a strong balance sheet and is well capitalised, backed by a strong reinsurance programme, and we are monitored by the Prudential Authority, just like all the other insurance companies.

“In fact we have three times the more than required minimum, so we are not worried about our ability to settle claims.”

Masondo acknowledged that Sasria had a recent history of “claims problems” — long delays in settling claims — but said the organisation had worked hard to beef up its claims handling capacity, including installing a new system last November.

“Our focus is on settling claims as quickly as possible,” he said.

Sasria sent a letter to “non-life” insurers and brokers on Monday, assuring them that the organisation had “centralised all the claims that stem from the recent events to a specialist team of experts who will facilitate the claim handling”.

“We are not going to expect the victims of looting to prove the merit of their claims,” he told TimesLIVE. “We want to resolve them as quickly as possible.”

All going well, Masondo said, that could be within a week in the case of smaller claims.

“But in the case of claims for buildings and the like, it will take longer.”

But if you’re putting in a claim, be prepared to supply some form of proof that you owned the stolen goods.

“There are always fraudulent claims ... so we have to investigate those claims to protect all our policyholders.”

No excess payments are due with Sasria claims, but the policy does not make provision for a month’s free car rental, in the case of stolen or damaged cars, as is the norm with “normal” motor claims.

“We don’t currently offer that, but we are looking into it,” Masondo said.

Added to an insurance policy, Sasria cover is extremely affordable — as little as R2 for a car and less than R50 a month for several cars and household contents.

Masondo’s advice to consumers who have insurance on their cars and/or their household contents is to check that their Sasria cover applies to both.

While most companies had Sasria cover, he said, the sad reality was that many individuals did not have any insurance cover at all.

Cyril Ramaphosa: 'We will restore calm and order'

President Cyril Ramaphosa on Monday vowed to "restore calm and order", as violent riots and looting rocked large parts of KwaZulu-Natal and Gauteng.
News
1 year ago

On June 28, Insurance Awareness Day, Budget Insurance warned that as more than 6.6m SA vehicles were uninsured and some homes underinsured by up to 60%, too many South Africans would have to pay for repairs, replacements and third party costs from their own pockets “if disaster does strike”.

On Monday, its sister company, Auto & General, emphasised the need for Sasria insurance, given the violent protests.

“Because of the unpredictable and often chaotic nature of these incidents, both private and public property can suffer expensive damage,” says Ricardo Coetzee, head of Auto & General Insurance.

“It is for this reason that we encourage people to ensure that Sasria cover is included in their insurance policies so that they are covered should the matter affect them personally.

“If they’re not properly covered, their insurance company might reject claims for damage or loss incurred during a strike, civil unrest or protest.”

Sasria cover is automatically included in policies covering financed vehicles, and Sasria cover usually continues as long as the policy does.

“But if your car isn’t financed at the time of taking the policy, or if you’re insuring your house or home contents, then Sasria cover is optional, and won’t be automatically included,” Coetzee warned.

“While there have been some delays in Sasria-related claims, an escalation process to Sasria has been established by Auto & General to rectify the issue and this process has assisted us in reducing the turnaround time.”

Masondo confirmed that Sasria cover is immediate — there is no waiting period. But as Sasria has told the industry, while their clients may request Sasria cover at any time or increase their insured limits, “clients will need to declare no existing damage is in place at the time of issuing cover or increasing cover”.

“Pre-existing damage is not covered.”

Ramaphosa raises hope for restoration of law and order

Addressing the nation on Monday night, Ramaphosa said government has decided to mobilise "all available resources and capabilities to restore order".
News
1 year ago

Tshwane Metro Police and SAPS officers were involved in running battles with looters on Monday night as violent protests continued to spread across ...
News
1 year ago

President Cyril Ramaphosa on Monday night gave the names of 10 people known to have died in violent riots in KZN and Gauteng since Friday.
News
1 year ago
Next Article