Zuma's daughter to be questioned for 'inciting' rioting 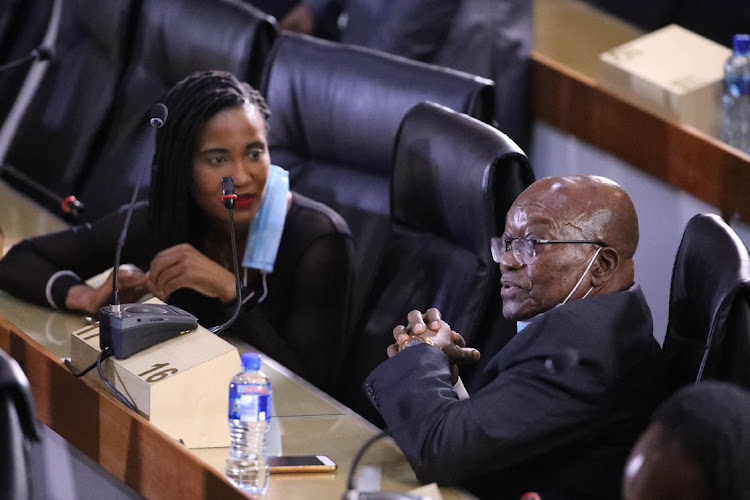 Former President Jacob Zuma and Duduzile Zuma at the State Capture Commission in Johannesburg in this file picture. The ANC has announced that it was going to hold her accountable following recent violent protest actions.
Image: Veli Nhlapo

The ANC will make Duduzile Zuma-Sambudla account for her utterances in inciting the ongoing unrest after the arrest of her father.

Jessie Duarte, the ANC’s deputy secretary-general yesterday confirmed that Zuma-Sambudla was a member of the ANC and that she would need to answer for her comments.

“It’s not just Duduzile who is behind this, there are five others who have made similar comments on Twitter. They have made comments such as ‘let it burn’ and ‘you’ll reap what you sow’. We are not going to leave it there, she will have to answer where her utterances will lead to,” said Duarte.

During a media briefing yesterday on the outcomes of the national executive committee (NEC) meeting which took place at the weekend, Duarte said: “The ANC will act against any people within its own ranks who have fanned the flames of these uprisings and called for, or are in any way involved, in inciting such violence.”

Zuma-Sambudla appeared to take a swipe at President Cyril Ramaphosa on social media, defending the “criminal elements” who were behind millions of rand worth of damage after violent looting, fiery protests and national road closures in KwaZulu-Natal as part of the Free Jacob Zuma campaign.

The violence has since spilt over to Gauteng, where numerous shopping centres were looted.

On Sunday night, Zuma-Sambudla tweeted: “How does our Proxy President for WMC tell us live that he is watching people’s Twitter accounts ... that is why we have no leadership in the country, ubusy neTwitter ... what a joke!!! Our people are hungry. Our people don’t have jobs. Go work and stop stalking people on Twitter ...”

Duarte conceded that the violence could, in part, be a result of factionalism within the ruling party. “But we cannot factionalise comrade Zuma and his circumstances. It saddens the movement that he was sentenced to 15 months in prison. It has its nexus, people began being angry about his arrest and that is where it [the violence] started,” she said.

She said NEC members who were tasked with visiting Zuma before his arrest had heard of the issue being centred around ethnicity. “But comrade Zuma does not subscribe to that. What is happening is much bigger...” said Duarte.

Meanwhile, EFF leader Julius Malema also appeared to have fanned the flames of violence that have engulfed Gauteng and KZN after he tweeted that his party members would join in on the anarchy that has been playing out.

Yesterday, Malema tweeted: “No soldiers on our streets! Otherwise, we are joining. All fighters must be ready... they won't kill us all. We need a political solution to a political problem, not soldiers.”

SAPS spokesperson Col Brenda Muridili said they have issued a warning that those who are identified for inciting violence on any platform will be arrested on a charge of inciting others to commit a crime which is a criminal offence.

The former president's daughter said Zuma's supporters would fail him if they stopped advancing the fight for "Radical Economic Transformation" and ...
News
6 months ago