Gunshots outside Nkandla as Duduzane makes appearance to support his dad 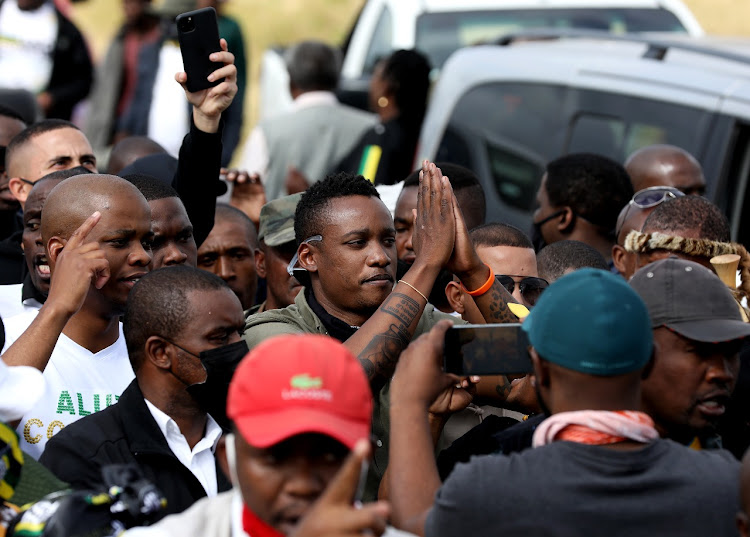 Former president Jacob Zuma’s most famous son, Duduzane, showed his face outside the family's KwaDakwaduse homestead in Nkandla on Sunday for the first time since his father's contempt of court conviction.

Duduzane has been visibly absent since his father’s supporters have been gathering outside their home, starting from Thursday, to “defend and support” Zuma after he was sentenced to 15 months' imprisonment by the Constitutional Court.

On the contrary, his older brother Edward has been a permanent feature, camping outside the family home with the energetic supporters since the beginning.

Duduzane, true to his renowned charisma, especially among the ladies, walked up and down the main road passing their home surrounded by Umkhonto we Sizwe military veterans and scores of his father’s supporters clad in ANC regalia.

This as various groups of supporters started trickling into Zuma’s home ahead of his “address to the nation”, scheduled for 6pm on Sunday.

As the crowds sang and danced outside Zuma’s home, some gunshots went off in the bushes across the road — the first shots to ring so close to Zuma’s home since the start of the activities this week.

This forced Edward to make a public announcement on a sound system set up in the extended open space outside the main yard to call for “discipline”.

Edward pleaded with supporters not to fire any gunshots in the air, as this would be viewed as a provocation by police, who have stayed far from the Zuma residence this week.

If there was any provocation, said Edward, it should be from the police, which would be met with fire.

“I am pleading with you, comrades, let us maintain discipline so that my father as well becomes happy that we have been supporting him with maximum discipline. Let us not disappoint him.

“Let us not do what they hope we will do, but let the police be the ones that provoke us. And then we will retaliate, and when we do retaliate, with the greatest force.

“We are not here to party. This is war zone of all of us who are determined to defend President Zuma, so let them provoke us first so that we chase them throughout all these mountains,” said Edward.

Zuma’s supporters continue to arrive at his home with a motorcade from the eThekwini region arriving at lunch time followed by a contingent from Mpumalanga while a local group of amabutho (Zulu warriors) arrived shortly thereafter.

The Umkhonto we Sizwe Military Veterans Association (MKMVA) press briefing at the entrance of former president Jacob Zuma’s home degenerated into chaos and was stopped prematurely on July 2 2021 after supporters intimidated members of the media.