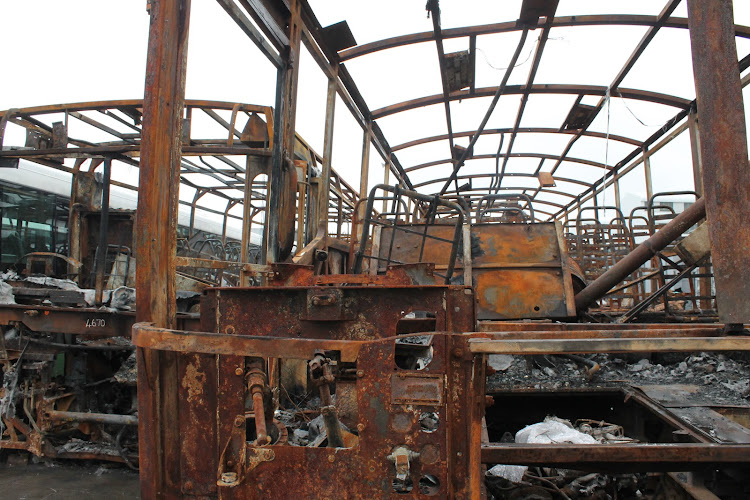 One of the Golden Arrow buses that have fallen victim to arsonists.
Image: Supplied

The new Western Cape transport and public works MEC, Daylin Mitchell, has had a baptism of fire.

A Golden Arrow bus has been set alight and more than 20 others have been stoned in Cape Town in Mitchell's first few days in the job.

He replaced Bonginkosi Madikizela, who resigned last month after a scandal about his academic qualifications.

Mitchell blamed the taxi industry for the vandalism, saying in a statement on Friday that  taxi drivers had intimidated bus drivers and other motorists.

“I strongly condemn the criminal acts of vandalism and intimidation on the part of taxi industry operators and drivers in the Nyanga area,” he said.

Captains of the biggest black-owned industry, the minibus taxi industry, do not feel any sense of civic duty to the communities they serve.
Opinion
8 months ago

A Limpopo taxi boss has accused transport minister Fikile Mbalula of intimidation over his branded vehicles bearing the face of embattled ANC ...
News
9 months ago

“Over the course of the last few days, reports have been received of at least one Golden Arrow bus being set alight and 22 others stoned by irate taxi drivers, who also intimidated bus drivers and other staff transport operators in the area.

“One bakkie was torched and a number of city [of Cape Town] vehicles and staff have also been attacked in the area. I thank the SAPS and traffic authorities for their swift response, which included the impounding of 56 minibus taxis and several arrests.”

Mitchell said his department, the provincial transport registrar and the provincial regulatory entity have been “in contact with leaders of the SA National Taxi Council and the Cape Amalgamated Taxi Association to discuss urgent measures to be taken by these representative structures to rein in their members who may be involved in these criminal activities”.

He said his department was monitoring the situation and “may use video footage and other evidence gathered by the SA Police Service to take disciplinary steps against operators, drivers and taxi associations”.

Mitchell added: “My  department and I remain committed to transforming and formalising the minibus taxi industry for the benefit of those legal and law-abiding minibus taxi operators, drivers and employees who are committed to providing a safe and dignified public transport service to commuters.

“We will, however, not compromise on the safety of commuters and citizens and have made it clear that the Western Cape government will use all available regulatory measures and powers at its disposal to take strong action against those operators, drivers and associations who make themselves guilty of public violence, arson, intimidation, extortion or any other criminal acts that impact on the safety and dignity of public transport users and citizens.”