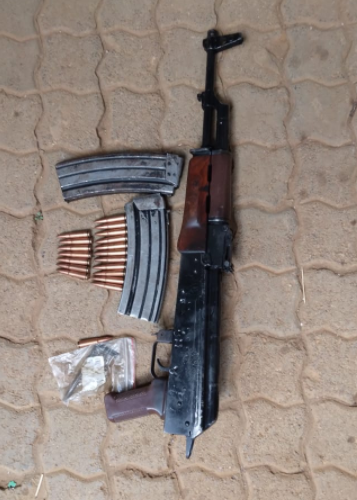 One of the 40 illegal firearms and ammunition seized by Gauteng police this week.
Image: Supplied / SAPS

Gauteng police this week seized 40 illegal firearms and more than 480 rounds of ammunition during various operations.

Capt Mavela Masondo said these gun seizures were also accompanied by a number of arrests.

In one incident, three security guards were arrested in Heriotdale in Germiston after they were found in possession of six illegal guns.

“Members from Germiston police station were patrolling on May 7 when they spotted a Toyota Quantum full of security guards. They stopped the vehicle and suddenly the security guards jumped out and fled on foot. Three of them were apprehended. Upon searching the vehicle, police found six unlicensed firearms with ammunition,” Masondo said.

In Tshwane on Friday, guns were seized as police followed up on a robbery that took place at a Spar store in Mamelodi.

“Two suspects, aged 24 and 36, were apprehended while three escaped and evaded arrest. Inside the house police found an AK-47 rifle with ammunition. Two vehicles suspected to be stolen and being used in the robbery were seized,” said Masondo.

Four other people were arrested in Olievenhoutbosch. Masondo said police had received information that the group was planning on committing an armed robbery when they pounced on them.

Six gunmen who attempted to rob a butchery in northern KwaZulu-Natal and a bystander were killed in a shoot-out with police on Friday night.
News
6 months ago

“Members of SA Police Service and Tshwane Metro Police Department followed up on information from Olievenhoutbosch until Attridgeville where the first suspect was arrested after he was found with an unlicensed firearm that was reported stolen in Erasmia in October 2018,” said Masondo.

“The team found three more suspects inside a Toyota Avanza where an unlicensed firearm loaded with ammunition was also recovered.”

Of the Turffontein arrests, Masondo said police were patrolling in the area when they noticed a white BMW driving slowly. They pulled over the vehicle and when they searched the occupants and vehicle, two unlicensed firearms were found.

Gauteng police commissioner Lt-Gen Elias Mawela said: “The volumes of illegal firearms recovered by our members is a clear indication that we still have many firearms in the wrong hands. This is a key measure which can assist us in dealing decisively with aggravated crimes in Gauteng.”