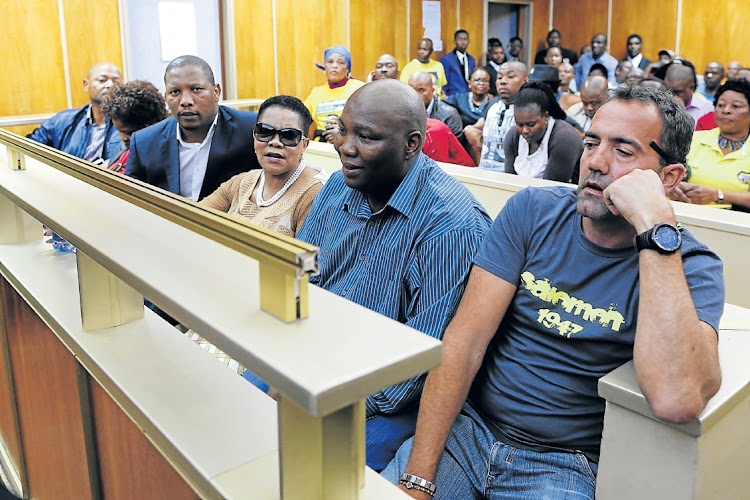 About R1.38m, plus interest, of businessman Dean Fanoe’s funds have been forfeited to the state as ill-gotten gains from his role in the Nelson Mandela memorial services scandal.

Judge Sunil Rugunanan ruled that Fanoe and his close corporation Mantella Trading had benefited directly from the proceeds of unlawful activities and ordered that the R1.38m and all the interest it had accumulated over the intervening seven years should immediately be forfeited to the state.

Fanoe made a whopping and instantaneous R692,000 profit on an ANC T-shirt deal as an allocated procurement middleman in the Nelson Mandela memorial services.

His cut of about R1.38m was part of the roughly R10m the state says in court papers was fraudulently diverted from the Buffalo City Metro (BCM) budget meant for former president Mandela’s funeral.

According to court papers, Fanoe – a close friend of then ANC regional secretary Pumlani Mkolo – was given his R1.38m slice of the pie but paid the actual T-shirt supplier only R688,000, scoring himself a huge profit for simply sourcing the supplier.

When the scandal broke in 2014, the Asset Forfeiture Unit moved in and obtained a preservation order freezing R5m in various bank accounts, including the R1.38m in Fanoe’s business account.

Some time later, the R1.38m was forfeited to the state as being proceeds of a crime.

The fraud case against recently axed Eastern Cape health MEC Sindiswa Gomba and 15 others has been moved to the high court.
News
10 months ago

But, shortly afterwards, the National Prosecuting Authority temporarily withdrew criminal charges against Mkolo, Fanoe and nine others allegedly implicated in the fraud scandal. Fanoe immediately went to court to get back his funds.

The money has been steadily gaining interest in NN Dullabh & Co’s account since then.

Fanoe had claimed in court papers that there was no evidence that the payment of the amount of R1.38m was the instrumentality or the proceeds of a criminal offence committed by himself or his close corporation Mantella Trading 522.

He said his dealings had been with Victory Ticket close corporation and its director and taxi boss Mzwandile Sokwali (also known as Richard Ntozini) as part of a normal business transaction.

But, the state also produced Sokwali’s affidavit in which he pleaded guilty to fraud and money-laundering.

The taxi businessman had said Mkolo had asked him, through his company Victory Ticket, to inflate a quote for BCM for the transportation of mourners from R6m to R10m as they would need the R4m balance to finance “other ANC activities”.

Victory Ticket was only registered on the Buffalo City Metro database after rendering and being paid for the services.

Victory Ticket had also paid other providers for services rendered, including Fanoe.

Fanoe acknowledges in his affidavit that he is a close friend of Mkolo. He also claimed that the 100% mark-up on the T-shirts was a “norm in the industry”.

But judge Rugunanan said no proper procurement process had been followed to appoint Victory Ticket as a service provider and all the services had been rendered before the municipal manager had even approved any deviation from normal processes.

He said it was clear from the evidence that Mkolo had handpicked Fanoe to provide T-shirts. BCM via Victory Ticket would pick up the inflated tab.

The evidence indicated that the amount of R5.8m paid into Victory Ticket’s bank account and subsequently redirected into other bank accounts, including Fanoe’s, “constitutes the proceeds of unlawful activities associated with fraud, theft and money laundering”.

Rugunanan said Victory Ticket had been used as a “conduit for laundering BCM funds” into various bank accounts, including Fanoe’s.

“Fanoe benefited directly from the proceeds of unlawful activities.”

Government officials charged over alleged misuse of funds meant for Nelson Mandela's funeral have each been released on R1,000 bail.
News
11 months ago

In a dramatic about-turn, a number of prominent ANC Eastern Cape figures will be back in court this week to face charges relating to a seven-year-old ...
News
11 months ago

Funds swindled at Tata's funeral.
News
1 year ago
Next Article