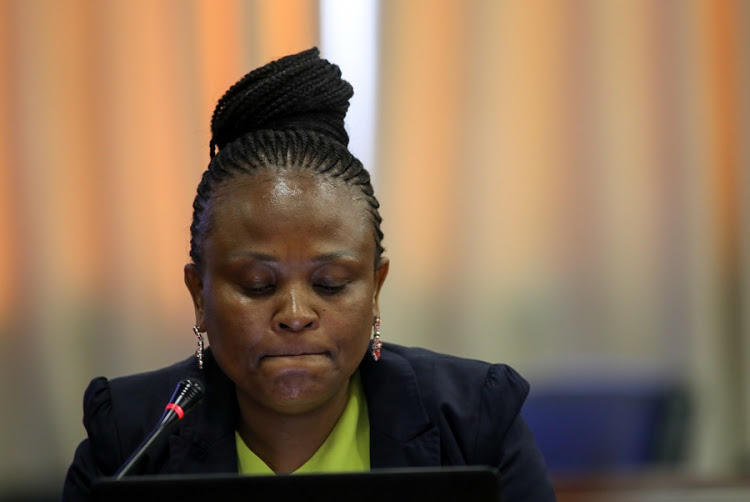 Public protector Busisiwe Mkhwebane's application for leave to appeal a court judgment that set aside her report against minister Pravin Gordhan was dismissed by the high court in Pretoria.
Image: Esa Alexander/Sunday Times

The public protector and her office suffered a legal blow on Wednesday when the high court in Pretoria dismissed their application for leave to appeal a court judgment that set aside her report on public enterprises minister Pravin Gordhan.

A full bench of the high court in Pretoria in December overturned a report by Busisiwe Mkhwebane which found Gordhan had irregularly approved the early retirement of former SA Revenue Service (Sars) deputy commissioner Ivan Pillay with benefits in 2010.

Mkhwebane and the office of the public protector launched an application for leave to appeal the judgment — except for orders favourable to them.

At the same time, Gordhan and Pillay launched their own application to cross-appeal the judgment and order where the court had found against them. They were also unsuccessful with their application as the court dismissed it on Wednesday.

“We are satisfied all the issues raised in these applications for leave to appeal and cross-appeal were fully covered and considered in the judgment. We are therefore of the view there are no reasonable prospects of success in another court,” the full bench of judges said.

“Put differently, we hold the view there is no prospect that another court may come to a different conclusion in this case. Therefore, the application for leave to appeal and cross-appeal the judgment fall to be dismissed.”

Gordhan was finance minister at the time. In her report, Mkhwebane recommended President Cyril Ramaphosa take disciplinary action against Gordhan. Mkhwebane’s investigation was prompted by an anonymous complainant.

Gordhan, who denied any wrongdoing, did not take it lying down and took legal action last year to have the report overturned. Pillay and former Sars commissioner Oupa Magashule then joined Gordhan in the litigation against Mkhwebane.

Public protector Busisiwe Mkhwebane has a prima facie case to answer, the ANC NEC has concluded.
News
1 year ago

The ANC’s top six officials should be reprimanded by its NEC for ordering MPs to vote in favour of a parliamentary process to test the public ...
News
1 year ago
Next Article