Limpopo is home to nature reserves and indigenous forests 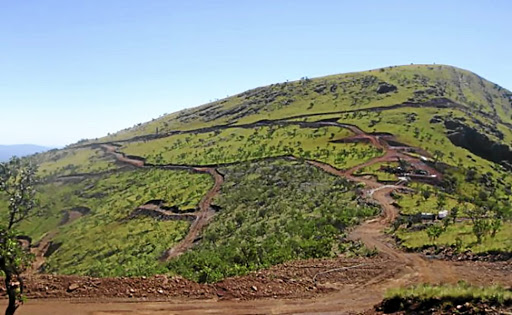 Madimatle mountain in Limpopo is a sacred site that also has historical and environmental value. All of these are under threat from a mining company that wants to build an open-cast mine on it.
Image: Supplied

The Limpopo province is known for its lush forests, national parks, fruit farms and heritage sites - but lately its green image has come under threat from a proposed multi-billion-dollar industrial mega-project.

Made up of a cluster of 20 steel and other metalworking plants and fuelled by a coal-fired power station, supporters say the project would create much-needed local jobs, while opponents warn it would spell catastrophe for the climate and health.

"We are worried that if the project goes ahead, we will be wearing masks for years to come, not because of coronavirus but because of pollution," said environmental activist Innocent Ramuhala from Mudimeli village, close to the proposed site.

"We have so many questions and so few answers," said Ramuhala, secretary of the Mining and Environmental Justice Community Network of South Africa (MEJCON-SA).

It promises to provide nearly 54,000 jobs in a province with 22% unemployment, according to government data.

But critics say South Africa is already Africa's biggest emitter of planet-heating carbon dioxide due to its heavy reliance on coal for electric power, and is failing to align its energy policy with a pledge to reach net-zero emissions by 2050.

Zaid Kalla, spokesman for the Limpopo Department of Economic Development, Environment and Tourism (LEDET), which is tasked with assessing the Limpopo project's merits, said "balancing economic, social and environmental benefits ... forms part of the ongoing review and consideration of the application".

The Centre for Environmental Rights (CER), a South African environmental law organisation, has submitted comments opposing the project on behalf of MEJCON-SA and other green groups.

"We have strong objections to the project – which entails the development of massive, unnecessary and expensive polluting infrastructure," said Michelle Koyama, an attorney with the CER.

In Mudimeli, which is close to potential coal mine sites mentioned in the project's environmental impact assessment (EIA), young boys ride past on a donkey-drawn cart.

"These boys should be in school but instead they are driving carts for money," said Lawrence Neluheni, 37, who had heard about the EMSEZ on the radio but said the details remained hazy.

"Of course we want jobs... But we also want our health - if you are rich but you are sick, then what is the point?" said the construction worker, covered in dust from a day of building.

Authorities are on the scene at a mining incident in Mokopane, Limpopo
News
1 year ago

Economic zones like the EMSEZ are typically business or industrial areas, governed by special laws, that aim to boost economic activity and employment.

The EMSEZ is the largest such zone planned for South Africa, according to the EIA published in February by Delta BEC, a South African environmental consulting firm.

The EMSEZ will be managed by the Limpopo Economic Development Agency (LEDA), with capital investment estimated at 248 billion rand ($16.8 billion), according to the EIA.

The area was selected for its proximity to minerals and road networks, says the assessment, which was funded by the LEDA.

The project is expected to generate about 1 billion tonnes of carbon dioxide over its lifetime - equal to a little more than double South Africa's current annual emissions.

The planned EMSEZ would comprise a northern site for logistics and a southern site for the energy and metallurgical cluster - where more than 100,000 indigenous and protected tree species are found, according to the EIA.

Chinese company Shenzhen Hoi Mor has reportedly pledged to invest $3.8 billion in the zone, but could not be reached for comment on its role.

The EMSEZ operator permit was issued to South African Energy Metallurgical Base, a subsidiary of Shenzhen Hoi Mor, according to a government news site.

Shavana Mushwana, a spokesman for the zone, added that China would be a likely export partner for products and materials produced in the EMSEZ, alongside "various market destinations across the globe".

Chrome stockpiles and an excavator worth more than R2m were seized in a raid on an illegal mining operation in Limpopo on Friday, the Hawks said.
News
1 year ago

Bordering Botswana, Mozambique and Zimbabwe, Limpopo's UNESCO Biosphere Reserve and reputation for being the country's winter breadbasket have earned it the title of Africa's Eden.

It is also considered a hotspot for climate change, with rising temperatures and increased rainfall variability in the region already leading to more droughts and floods, according to University of the Witwatersrand researcher Victor Munnik.

The N1 highway that runs along the proposed EMSEZ site is flanked by game lodges and villages shrouded in dense, green indigenous trees.

Lodge owner Johan Fourie, deputy chair of the Save Our Limpopo Valley Environment group, said its members - citizens based in South Africa and abroad - were not "anti-development".

"But it must be the right kind of development that benefits local communities," he said, walking through his property where a 1,200-year-old baobab tree towers above his lodge.

Recent rains have painted the area green, but for years it has been brown and parched due to patchy rainfall, Fourie said.

The EIA for the zone - which will require 80 million cubic metres of water per year - refers to a possible water source in Zimbabwe that could meet part of this demand, while noting that Zimbabwe is at high risk of groundwater scarcity.

"This keeps me up at night. Where will we get this water from?" asked Fourie.

Part of the planned EMSEZ will be built on the ancestral land of the Mulambwane people, where graves and mopane trees are found, said activist Ramuhala.

"It feels like I am between a rock and fire, imagining that my village can be destroyed from the coal mine and ancestral land lost to the industrial zone," he said, standing by the proposed site.

Hundreds of women camp out here twice a year to collect mopane worms from the Emperor moth, which they dry to eat.

Regina Mukwevho, 48, has sold high-protein mopane worms for the past decade, enabling her to build a home and support her family - but she, like many villagers in Mudimeli, said she had never heard of the economic zone project.

"If it bring jobs then OK, but what jobs? We are in the dark. Experts must explain it to us and they must make sure our groundwater will be safe," she said.

The LEDET recently put the project on hold temporarily, stating that the environmental impact assessment was not complete, partly due to poor community consultation, a lack of clarity on water and energy supplies, and the fact that the EIA did not recommend a final decision on the zone.

EMSEZ spokesman Mushwana said public participation would continue to be solicited through April, while Kalla from the LEDET said it was up to the Limpopo Economic Development Agency to decide whether a new project site should be considered.

In Phalaborwa humans, leopards, elephants, lions live side by side
News
2 years ago

Kgatla had plans with wife, kids
News
2 years ago

Area where roaming lions spotted is their 'usual pride location'

The area where a pride of 14 lions was spotted roaming near Phalaborwa last week is their usual pride location which they have returned to, according ...
News
2 years ago
Next Article