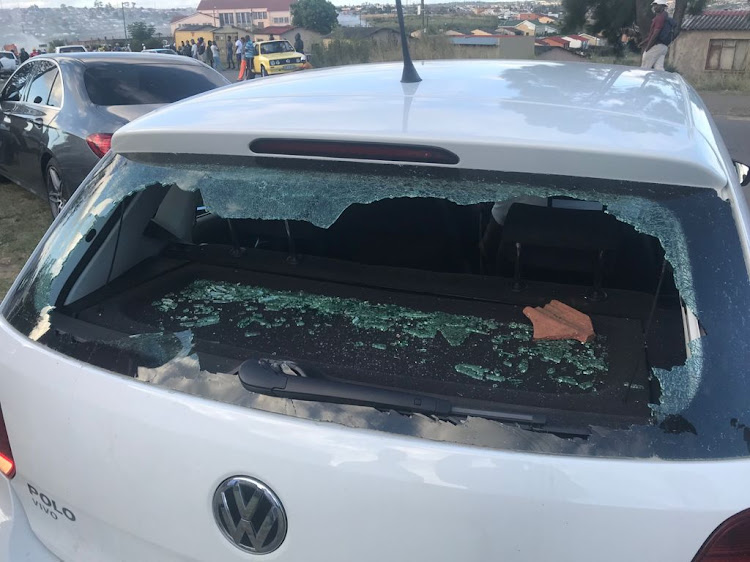 One of the cars with smashed windows after ANC members fought in Mdantsane on Monday afternoon.
Image: SUPPLIED

An ANC branch general meeting turned into a battlefield when fists flew and cars were trashed in Mdantsane's ward 20 on Monday afternoon.

The branch is preparing for a by-election after a former local ward councillor Ntombizodwa Gamnca was fired by Cogta MEC Xolile Nqatha in January. Gamnca was found guilty of contravening the councillors' code of conduct in the Municipal Systems Act.

SowetanLIVE sister publication DispatchLIVE understands that a number of candidates within the ruling party are eyeing the position. Insiders said various factions, some comprising of senior leaders, have been pushing for their preferred candidates to remain in the race.

However, it was not immediately clear what led to the fiasco on Monday afternoon.​

“It was chaotic. I saw people busy trashing cars outside the venue and others were fighting physically,” said one branch member, speaking from NU7 community hall where the meeting was held.

Another branch member said she had heard rumours that one of the members who had been beaten up was rushed to hospital. This could not be verified at the time of publishing.

Drought-stricken municipalities in the Eastern Cape breathed a sigh of relief on Friday when human settlements, water and sanitation minister Lindiwe ...
News
1 year ago

ANC Dr WB Rubusana regional secretary Antonio Carels confirmed to DispatchLIVE that there was a disruption.

According to Carels, two cars were trashed during the pandemonium.

However, he insisted that the disruption was caused by amaphara (thugs) and not members of the party. He said police were called to monitor the situation.

“There are no arrests, as far as I know. The process is now going smoothly. As I'm speaking to you, we are finalising registration,” he added.​

Eastern Cape police spokesperson Khaya Tonjeni had not responded to SowetanLIVE sister publication DispatchLIVE's request for comment at the time of publishing.

The by-election will be held on  April 21.

Mbizana local municipality to be renamed after Winnie Madikizela-Mandela

Mbizana local municipality has been officially renamed after the late struggle icon Winnie Madikizela-Mandela in honour of her contribution to the ...
News
1 year ago

Prince Ahlangene Sigcau, SA’s ambassador to Malawi, is officially the new king of AmaXhosa.
News
1 year ago
Next Article