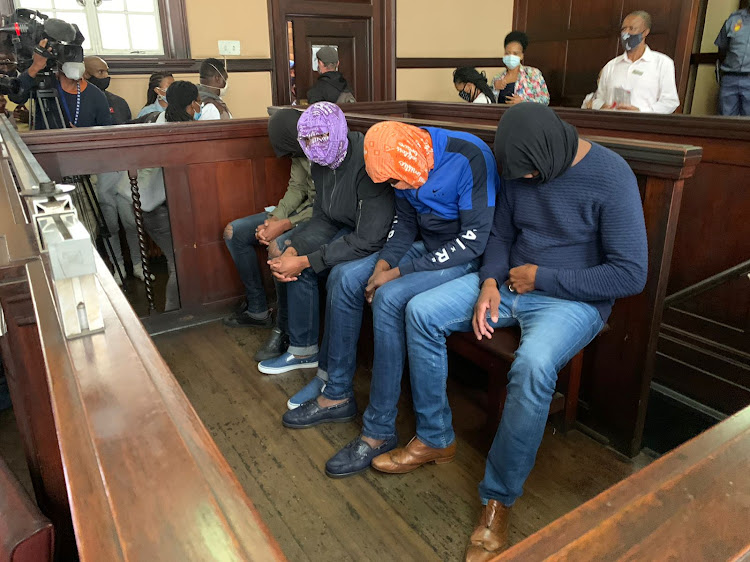 Four police officers from the public order policing unit appeared at the Johannesburg magistrate's court on March 17 2021 in connection with the death of Mthokozisi Ntumba.
Image: Deepa Kesa/TimesLIVE

Four police officers accused of killing Mthokozisi Ntumba, a bystander caught up in the protest by Wits University students last week, appeared in the Johannesburg magistrate's court on Wednesday.

They covered their faces with buffs over their heads.

The case is back in court on March 24 for a formal bail application. They face a charge of murder, three charges of attempted murder and defeating the ends of justice.

The count of murder is listed as a schedule 5 offence.

Each accused had their own representative. One of the legal representatives asked for the state to provide a post-mortem report, forensic investigation report and divulge whether they would use eyewitness statements.

The representatives asked about evidence used to make the charge a schedule five one when there was no post-mortem report.

It took half the day for proceedings to begin and students arrived late at court after a rainy start to the day. They chanted and sang struggle songs, at one point creating a circle around a placard that read: “Justice for Mthokozisi.”

Police watchdog Ipid has sent a team to investigate allegations against police officers after a Wits student protest took a tragic turn on March 10 2021. A man was allegedly killed by police as they fired rubber rounds to disperse protesters. Students, who are protesting against financial exclusion, have vowed to carry on the protest.

Police were armed and visible with more than five vehicles parked outside the courthouse. The students sang “Asinalo uvalo”, which loosely translates as “we have no fear”, pointing at the police.

Wits SRC president Mpendulo Mfeka said they would not stop until their demands were  met and justice was served.

“We are here to ensure that the police who shot Mthokozisi are held responsible,” he charged.

The Independent Police Investigative Directorate (Ipid) on Monday said the officers were from the public order policing unit.

Cele said the allegation that police officers killed Ntumba was becoming difficult to defend. He said he received monthly reports from Ipid regarding police conduct.

The SA Union of Students in KwaZulu-Natal has called for higher education minister Blade Nzimande to be held accountable for the death of Mthokozisi ...
News
10 months ago

The City of Johannesburg says it will not express any view on whether the municipality would support the renaming of De Beer Street in Braamfontein ...
News
10 months ago
Next Article