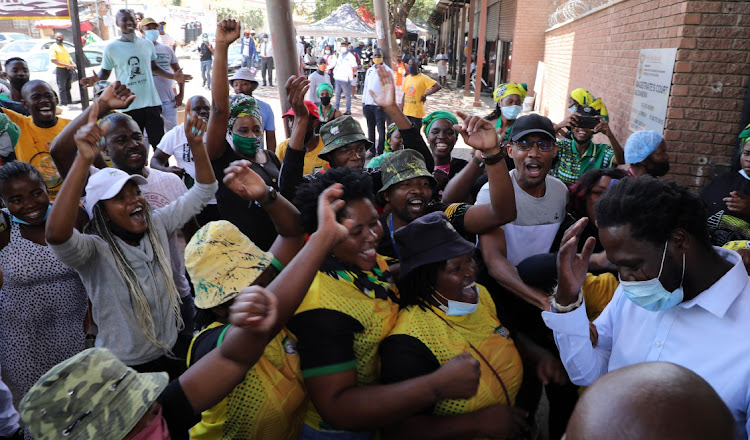 Members of the ANC outside Alexandra Magistrates Court during the appearance of rape accused Kenneth Mgaga.
Image: ANTONIO MUCHAVE

An ANC councilor, who was accused of rape, has been reinstated in his position after charges against him were provisionally withdrawn.

The move was welcomed by the party in Greater Johannesburg region.

But the National Prosecuting Authority spokesperson Phindi Mjonondwane could not immediately confirm this.

The ANC in Johannesburg said on Wednesday Kenneth Mgaga, 36, who was arrested and charged with rape in December will resume his functions as a councilor after charges against him were provisionally withdrawn.

The party said the provisional withdrawal was "due to the state not being able to present a case that could stand the scrutiny of the a court of law".

The ANC Greater Johannesburg regional spokesperson  Sasabona Manganye said the party welcomed  the provisional withdrawal of the rape charges against  Mgaga by the Wynberg magistrate's court.

"We commend Cde Mgaga for his conduct during this difficult time as his revolutionary consciousness guided him and as such stepped aside and took a leave of absence from his duties as a PR councillor in the City of Johannesburg and allowed the law to take its course," Manganye said.

"Comrade Mgaga demonstrated the highest levels of discipline. The City of Johannesburg ANC caucus will therefore reinstate Cde Mgaga to his full functions as a councillor to continue doing his work of community service."

He said Mgaga respected the law enforcement agencies, courts and the ANC by not making any public statements or addressing public gatherings and as such, respected the integrity of the process.

Mgaga was charged with the rape of a 28-year-old woman on Boxing Day. He was arrested on New Year's Day. He was granted R2,000 bail last month.

Manganye said the ANC continues to support the struggle against gender-based violence and will continue to support all victims of the scourge.

The ANC in Johannesburg was left red-faced yesterday after party supporters in full regalia arrived at the Wynberg magistrate's court to support a ...
News
1 year ago

ANC supporters celebrated the release on bail of a councillor who was arrested on charges of rape over the weekend. Kenneth Mgaga, 36, was granted ...
News
1 year ago
Next Article