Dire state of municipal finances in the spotlight at cabinet lekgotla 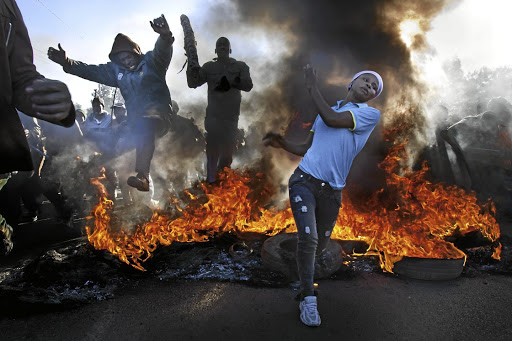 Zandspruit residents went on the rampage over the lack of services in the Johannesburg settlement, as have many thousands of South Africans. The cabinet legotla at the weekend will address this issue with an eye on the upcoming municipal elections.
Image: Daniel Born

The dire state of municipal finances was expected to take centre stage at the cabinet’s lekgotla that kicked off on Thursday.

This comes as the country prepares for local government elections, expected to take place between August and November.

In her first briefing as the acting minister in the presidency and cabinet spokesperson, Khumbudzo Ntshavheni said the government should not neglect municipalities, which is the level of government closest to the people.

The discussions on local government would centre on improving service delivery as well as ensuring that the incumbent does not leave a mess for whoever wins the 2021 vote.

“What is also critical for us is the discussion around the state of municipal finances,” Ntshavheni said.

“We know the challenges that we face in our municipalities, and municipalities remain the tier government that is closest to the people. Therefore, we cannot continue to neglect the state of their finances.

“We need to make sure that when the elections take place, the new municipal leadership will come into sound organisations that are able to deliver services. But also it’s also important to strengthen the delivery of services by municipalities.”

Ntshavheni said the cabinet lekgotla would receive presentations on how the government was performing when it came to the delivery of basic services, such as water. Acceleration of job creation at local government level was also likely to be discussed.

Another likely subject at the lekgotla is the budgetary constraints and how the government should prioritise its programmes.

Though the ANC has given the government a mandate on various issues, Ntshavheni said, the procurement of the vaccine remained the key focus.

“I’m sure all of you are aware that the governing party has given us certain mandates, but it remains the responsibility of government to prioritise those mandates because we live in an environment where our fiscal outlook is not very good. Therefore, there must be prioritisation as certain things will not be able to be executed, as acknowledged by the governing party.”

The ANC national executive committee lekgotla last week tasked its deployees in government to look into extending the R350 Covid-19 relief grant for unemployed people and the Temporary Employment Relief Scheme (Ters) for workers laid off because of the lockdown.

Recipients of the grant have also pleaded with the government to extend the payment of the grant that was discontinued in October. The government would this weekend discuss where the money for the R350 grant could come from. ​

“What the governing party had indicated to us is that they understand that there are budgetary constraints.”

She said that regarding Ters, the ANC has said the government must go back and negotiate because negotiations are going on with the minister for employment and labour in Nedlac,  the bargaining council and the relevant forums.

“So government must prioritise depending on what the budget can cover. The priority that we are very clear on is about getting vaccinations to the majority of South Africans so we can attain herd immunity,” Ntshavheni said.

A fed-up community activist in KwaDukuza has resorted to planting banana trees in potholes dotted about the KwaZulu-Natal north coast town to grab ...
News
5 months ago