Dagga 'grows' in the middle of the road 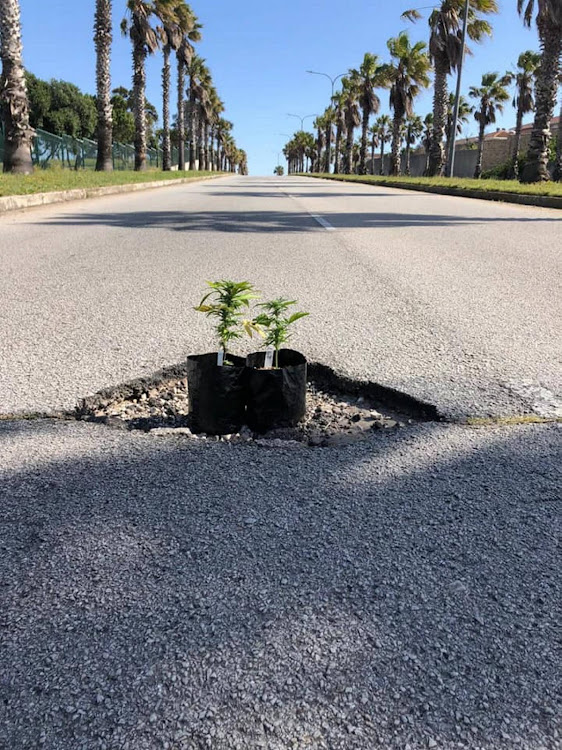 Holy smokes! Is that pot in a hole?

With the ever increasing number of potholes scattered across Nelson Mandela Bay putting many residents in a huff and a puff, social media users came up with an ingenious way to spread the awareness of potholes with a giggle.

Pictures of two potholes in the Summerstrand area posted on the “Potholes of Nelson Mandela Bay” Facebook page and sporting two pots containing dagga placed in potholes garnered more than 400 likes, 83 comments and 247 shares after their appearance on Friday.

The images of lush green dagga plants in the potholes are accompanied by the following caption: “‘POT’ HOLE OF THE DAY WINNER — A Happy Arbour Day to you all. And what a week it has been. TPIF! We here at POESA (Potholes of Everywhere in SA) salute the person responsible for these beautiful pot arrangements in Forest Hill Drive, Humewood & on the corner of Brighton Drive & 11th Avenue in Summerstrand.”

Seeking out the green-fingered landscaper with the creative imagination to fill the holes with pot, Sowetan's sister publication The Herald managed to track down a man who goes by the alias Regg H Timms.

He declined to give his real name.

Living in Ward 1 for the past 23 years, Timms said as a citizen of the world it was important to spread the word that potholes were causing a lot of anxiety for road users and the best way to combat the anxiety was to use humour and little dagga on the side.

“These specific plants were chosen as we are in a period [lockdown and its repercussions] where flexibility and humour are much needed,” he said.

“There has been much advancement in the medicinal use of such plants, particularly 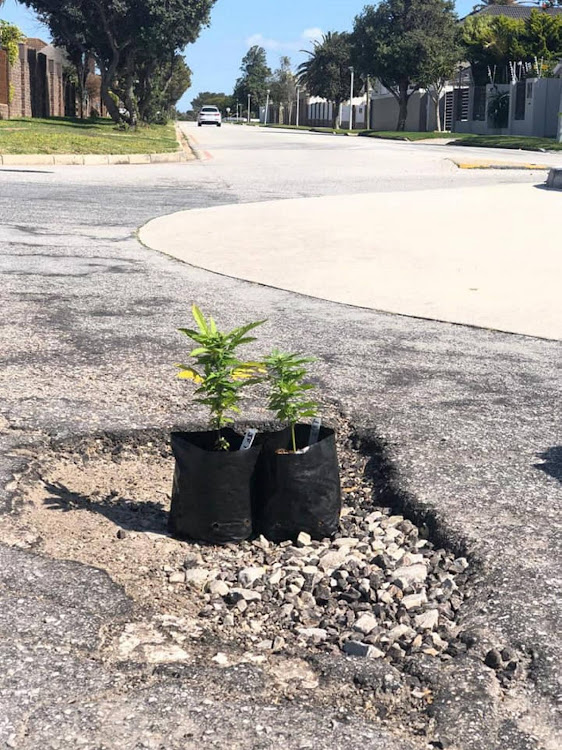 HIGH ROAD: Two pots of pot in a pothole at the intersection of Brighton Drive and 10th Avenue, Summerstrand
Image: supplied

with regard to anxiety. Since anxiety levels are so high globally I felt comfortable in choosing this particular 'pot' plant.

“The potholes were chosen fairly randomly as they happen to be on one of my regular routes and due to their depth often have to be anxiously dodged.”

Timms said the plants were not officially planted yet as he was merely gauging public opinion on the matter.

Asked what he thought the metro could do in the interim, Timms said the bare minimum would be for the municipality to paint luminous circles around the potholes to warn drivers of the dangers ahead.

The Facebook page, created about two weeks ago by a Port Elizabeth businessman, has more than 4,000 followers.

According to the man, there has been very limited feedback from the municipality on the page, with one or two comments made that the potholes had been noted.

On a frigid September morning in Mkumbi, a remote village in the Pondoland region of the Eastern Cape, 63-year-old Sizane Nompethu rose at dawn and ...
News
1 year ago
Next Article