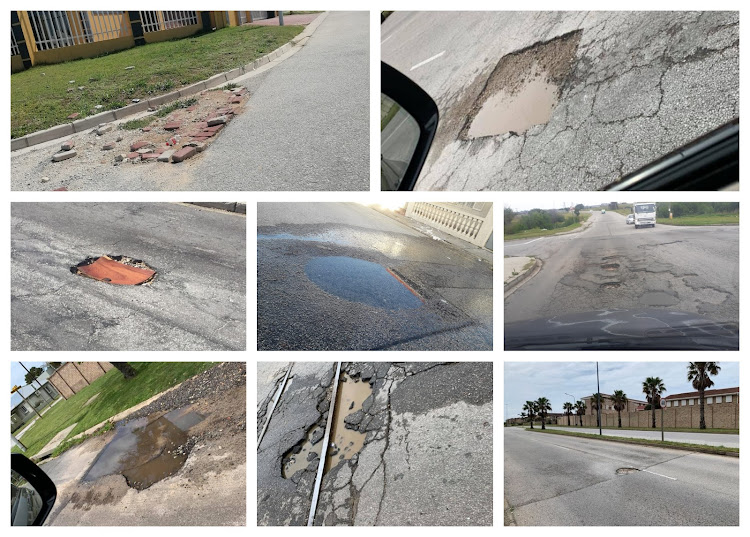 POT LUCK: A collage of some of the potholes posted on the Facebook page ‘Pot Holes of Nelson Mandela Bay’
Image: SUPPLIED

A Nelson Mandela Bay businessman is determined to ensure roads and transport portfolio head Rosie Daaminds and infrastructure and engineering boss Mongameli Bobani keep their promises of ridding the city of potholes by December.

Daaminds made the plucky promise during the launch of a multimillion-rand pothole project in Bethelsdorp in September.

Bobani made his promise to rid the city of potholes on Twitter a few days later.

He tweeted: “Hey! Listen Mr, Miss, and Mr[s] Pothole, as the city we’ve declared war against you.

WE have declare WAR against ALL POTHOLES, our ground forces are on the ground around the City clearing all these POTHOLES, come end November, we will WIN THE WAR. By DECEMBER our MOTORISTS will ENJOY a LOVELY HOLIDAY, POTHOLE FREE only in NMBM. https://t.co/lhSitxZ5IM

“We will finish you by December. Our motorists will enjoy their lovely holidays without you. Swatyupens [idiots].”

The businessman, who asked not to be named, created a Facebook page “Pot Holes of Nelson Mandela Bay”.

POTHOLE OF THE DAY WINNER - This pothole complete with a pond and beer tin was reported by Ndiphiwe Ndira Kona and is located at Betram Road in Zwide.

Residents can record the damaged surfaces with a potjie pot up for grabs to whoever finds the best-looking pothole before December.

“I was going to offer my grandmother’s special chicken pot pie recipe but thought a potjie pot would be better for someone to use during the festive season,” the businessman said.

The Walmer resident said the city was riddled with potholes and that the two politicians needed to be held accountable for their promises.

“We can’t just leave this to be another political promise.

“This happens all the time and such promises are just forgotten.

“They fall through the cracks.”

So far, the Facebook page has garnered almost 2,000 likes, with the businessman selecting a pothole photograph to be used as the “pothole of the day”.

Bobani applauded the businessman for starting the Facebook page.

“We welcome his initiative.

“We are determined to win this war against potholes.

“We are at war with potholes and we will win this war,” he said.

Daaminds called on the businessman to send a full list of the potholes to her office, including the street locations.

Daaminds said she had been checking on the progress made and many potholes had already been filled.

She hailed the businessman’s offer of a potjie pot.

The businessman, meanwhile, said he did not start the page to ridicule the municipality but to spur officials on to meet their December target.

“They are going to need help to identify all of these potholes.

“You can’t fix what you don’t know is broken.”

He said the page could be used as a source for the listing of all the potholes in the city.

“Rosie and Mongameli have publicly stated they will fix them by December and as ratepayer[s], we must hold them accountable.”