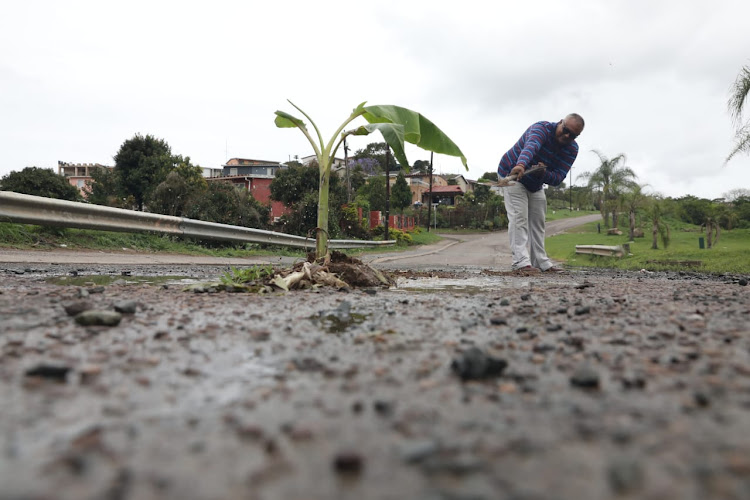 KwaDukuza resident Rishi Pooran has taken to planting banana trees in potholes to protest against what he says is a lack of service delivery.
Image: Sandile Ndlovu

A fed-up community activist in KwaDukuza has resorted to planting banana trees in potholes dotted around the KwaZulu-Natal north coast town to grab the attention of the local municipality.

Rishi Pooran took to social media on Sunday after planting three small banana trees in the vicinity of his Glen Hills home.

His “banana tree challenge” has been with met with praise, with some lauding it as a “marvellous idea”.

I thought about banana trees because we are literally becoming a banana republic.

Pooran told TimesLIVE that he decided to start his quirky campaign after complaints about the state of the residential roads were ignored by authorities.

“Our town has been neglected for far too long and action is long overdue. Cars are getting damaged and driving around the area is becoming hazardous because of the many potholes.

“I thought about banana trees because we are literally becoming a banana republic. The lack of service delivery is shocking and something has to be done about it.”

He said he and other residents have faced costly repairs to their vehicles because of the potholes.

WATCH: A fed-up KwaDukuza resident is planting banana trees in potholes around the KZN town as part of his service delivery protest
Video:Sandile Ndlovu@TimesLIVE pic.twitter.com/iXWXhm1QNe

Another resident, Bobby Reddy, said he was keen to take up the challenge.

“I will do the same. I am tired of the lack of service delivery. We deserve better,” he said.

A spaza shop owner in neighbouring Happy Valley, who did not want to be identified, said he and a few other locals have had to fill potholes themselves with stones and ash.

“I live here. Even though I don't have a car, I can't stand to see the state of our roads.”

He said the inspection showed that there are burst water pipes in the areas with potholes, which the iLembe district municipality had to repair before they attempted to do any work.

“The matter was not reported to us as KwaDukuza Municipality, so we wish to desist any suggestion that says we were told and kept quiet. We wish to place it on record that other potholes where there is no burst pipe issues have been attended to in the same community,” he said.

“Our technicians are already in discussion with iLembe to fix this problem.

“While we understand that our communities are restless when it comes to such problems, we also wish for members of the community to refrain from installing objects on potholes.”

Mkhize said people should rather report the matter to the civil engineering department so the potholes could be repaired, “instead of installing objects that exacerbate the problem and can lead to fatalities”.

iLembe municipality said it had a memorandum of understanding with KwaDukuza municipality that deals with road repairs.

“Subsequently, after a leak is repaired, iLembe district municipality sends a job card to KwaDukuza for them to carry out the repairs on the roads.”