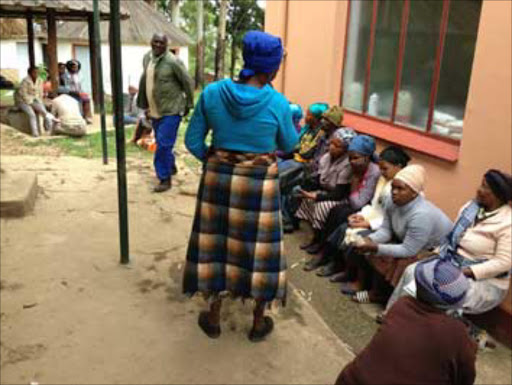 Patients wait outside a clinic in Canzibe village near Ngqeleni. After 10 years of desperation, residents of Mankosi village in Ngqeleni built their own clinic, but today there are still no nurses and other essential resources.
Image: SINO MAJANGAZA

When the desperate residents of Mankosi village in Ngqeleni, in the Eastern Cape, voiced their need for a clinic to be built in their area more than 10 years ago, they were told there was no money.

They were allegedly told they could build it themselves and resources would then be deployed. However, they are still waiting for the promised resources.

They raised nearly R250,000 from their own pockets and built a brick and mortar structure in 2010.

Provincial public works officials monitored the building work and gave it the thumbs-up.

“Everything was done up to par,” one resident told the Dispatch.

They said the need to build their own clinic stemmed from the difficulty of catching a bus at 5am to get to a clinic about 10km away in Ntshilini, as there was no other means of transport.

Walking such a distance, especially for the elderly, was gruelling.

Nongezile Tshemese, secretary of the committee that facilitated the building of the clinic, said it was frustrating to watch their dream turn into a white elephant.

“People are defaulting and some are dying because of the clinic problems. The mobile clinic hardly ever comes here. When it does, it does not have all the medicine. Department of health and public works officials were with us throughout the building process,” Tshemese said.

Ten years later, no resources such as equipment and nurses have been provided.

The structure, secured by a fence, has a reception area, three consulting rooms, a dispensary, a kitchen and ablution facilities.

A Tshwane temporary clinic made up of a tent and containers initially meant to last two years has now been operational for about five years.
News
1 year ago

“As things stand now, the structure is peeling. That is painful because we built it to make the department’s work easy. All they had to do was to bring the resources,” Tshemese said.

The secretary said when people were sick in the village, they were forced to hire private vehicles, which cost between R150 and R200, to transport them to the clinic.

She said their clinic would have served thousands of locals and those from neighbouring villages such as  Tshani and Luqolweni.

“There is no door we have not knocked on to get help. People with big names in government came here and made promises they did not deliver on. All we need is at least one doctor who will come at least once a week, and a few nurses,” she said.

The villagers said they felt they were not cared for by the same department and government that was on board when they started laying the foundations for the clinic.

Another resident, Sibongile Masiso, said they feared the clinic might now collapse.

One nurse and no clinic for 10 remote mountain villages

“We have to fork out money to renovate it constantly while it is not being used. That is painful for us because we really need the service of the clinic.”

Eric Nkulani said a man died in July while on his way to the nearby clinic.

“Elderly people walking to the clinic in Ntshilini are at risk of being raped or even killed because there is no transport. The white elephant clinic has now caused divisions among people in the village,” Nkulani said.

“We want that clinic to serve its purpose of providing health care. This government needs to stop giving us empty promises and meet us halfway, as we have done. The department of health was on board when we started. Now they have deserted us. We will continue to maintain it when it is opened because it is ours,” he said.

Provincial health spokesperson Siyanda Manana had not responded at the time of writing.