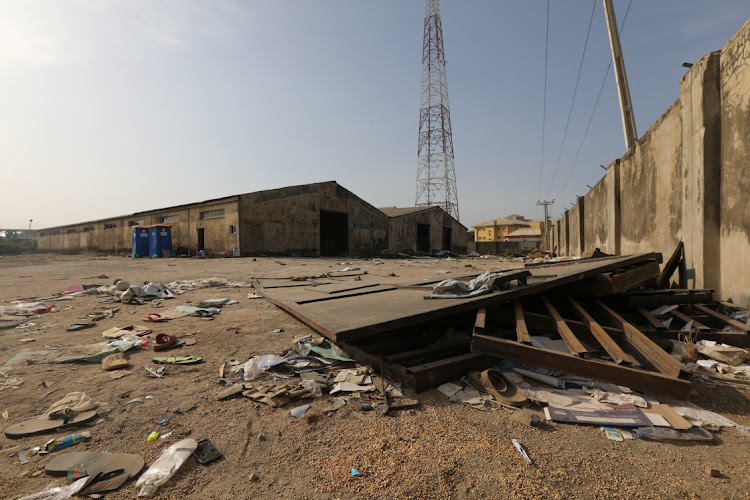 Looters have been targeting state warehouses across Nigeria stocked with COVID-19 relief supplies which they say should already have gone to the poor and hungry.

Authorities denied accusations of food hoarding or plans to sell the supplies. The National Governors Forum (NGF), which brings together the heads of Nigeria's 36 states, said some of the looted items were a "strategic reserve ahead of a projected second wave of COVID-19."

James, 29, in Yola, the capital of Adamawa state in northeastern Nigeria, said he was tired of unfulfilled government promises to help.

"I was really shocked when I got to the warehouse and I saw the quantity of stuff," he said. "Most of the stuff were out of date and I was like...why are we not getting it?"

He took seven cartons of noodles, two bags of sugar and a bag of rice.

Videos showing dozens of similar raids, from northern Kaduna state to western Kwara and Lagos in the south, have filled social media since late October.

Police brutality activist says she was barred from leaving Nigeria

Nigerian immigration officials blocked a prominent anti-police brutality activist from leaving the country and confiscated her passport, she told ...
News
1 year ago

At some warehouses, guards were overrun by looters, while state or local officials sent armed men to others to chase the looters away.

Many of the raids happened in the chaotic days following the shooting of protesters in Lagos on Oct. 20.

Minister of Humanitarian Affairs Sadiya Umar Farouk's office said distributing palliatives was the responsibility of state governors, not the federal government. The NGF did not return a request for comment.

With Nigerians spending 60% of income on food, according to analysts SBM Intelligence, and trust in government low, some support the looters.

"That is not stealing," Opeyemi Elegbede, a payment recovery officer for food vendors in Lagos, told Reuters. "They went for their rights."

"If these things were not distributed at that time, it means there were other motives behind it," she said. "It's this motive that they've been trying to explain, and it doesn’t really make sense."

Nigeria's information minister said "some form of regulation" could be imposed on social media just a week after protesters spread images and videos ...
News
1 year ago
Next Article