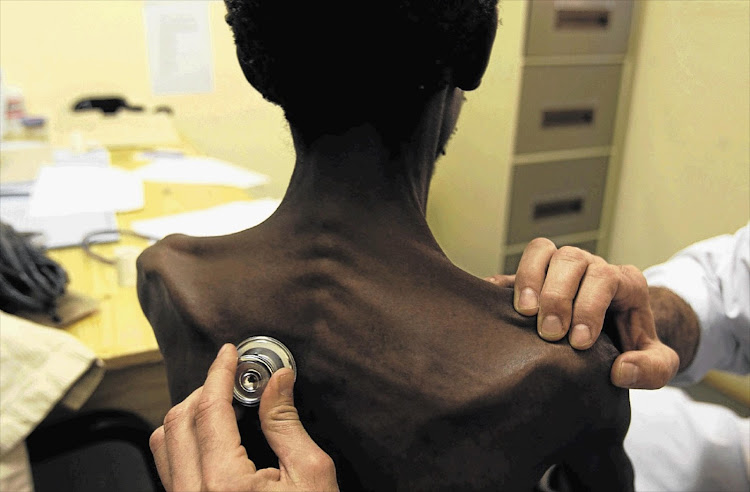 A TB patient is examined by a doctor. More lives could now be lost to TB as overstretched healthcare systems prioritise Covid-19.
Image: JAMES OATWAY

Vama Jele's heart dropped every time he heard that another migrant miner home from South Africa had died from tuberculosis (TB) due to skipping treatment under lockdown. In just four months, it happened 60 times.

When Covid-19 shut South Africa's mines, workers from Jele's homeland eSwatini and other neighbouring nations rushed home - disrupting TB care for thousands of miners at high risk from the disease due to weakened lungs after years working underground.

"There's such a strong focus on Covid that everyone is forgetting about TB and other non-communicable diseases, and this contributes to more deaths," Jele said by phone from the landlocked kingdom, where TB treatment is not always available.

Patients who do not consistently take the full course of several months' medication can spread drug-resistant tuberculosis, which is TB that is resistant to common medications, according to the World Bank.

Home to the world's third-largest mining industry, South Africa draws about 45,000 mineworkers from surrounding countries such as Botswana, eSwatini, Lesotho, Malawi, Mozambique, Namibia and Zimbabwe, making up about 10% of the workforce.

It is both an economy booster and a TB hotspot due to enclosed, dusty working conditions underground, said Cleopas Sibanda, programme manager for the Wits Health Consortium, a health research unit in Johannesburg.

There are 2,500-3,000 TB cases reported per 100,000 mineworkers in Southern Africa, according to the World Bank, a rate 10 times higher than what the World Health Organization (WHO) classifies as an epidemic emergency.

"Miners have a three-times higher chance of getting TB than the average person," said Sibanda, a doctor.

"Those miners that made it home, like many from Swaziland, may not have access to proper treatment. And all this focus on stopping Covid means we could lose more lives to TB," he said.

Swaziland is the former name for eSwatini, a nation bordered by South Africa and Mozambique that is home to 1.2 million people.

Tuberculosis patients who have to endure six months of treatment and more can now be successfully treated in four months when using newer TB drugs, ...
News
1 year ago

The Minerals Council South Africa, which represents mining firms, said TB death estimates of miners from other Southern African countries during lockdown were not known yet, but that mines were doing regular screening for TB and the coronavirus.

By mid-October, 190 mining employees had died from Covid-19, the council said.

But echoing Jele's concerns, Sibanda said he feared TB sufferers could be overlooked as Covid-19 draws attention and funding by governments, charities and businesses.

"When you look at the morbidity of TB and HIV, they are more lethal than Covid, yet Covid is getting the lion's share."

In South Africa, about 19,000 people have died from Covid-19. That compares with 58,000 deaths in the country from TB last year, according to the latest WHO data.

According to the WHO's 2020 Global Tuberculosis report, 43 countries have started using GeneXpert machines - typically used for rapidly diagnosing TB - for coronavirus testing instead.

The report said the Covid-19 pandemic "threatens to reverse recent progress in reducing the global burden of TB disease."

Pregnant women who contract Covid-19 are more likely to experience complications after birth compared to those who test negative, a new study has ...
News
1 year ago

Sibanda and Jele warned that helping illegal, informal miners was an even bigger challenge.

An estimated 30 million people are involved in artisanal or small-scale mining globally and 30-40% of this takes place in Africa, according to the African Minerals Development Centre, a mining research body run by the United Nations in Ethiopia.

In Mpumalanga, South Africa's eastern province, thousands of retrenched miners from different countries, or those seeking better pay, go underground nearly every day to mine coal.

Despite the lockdown, the informal miners kept working.

Bongizwe Madonsela, 67, current head of safety at an informal mine in the coal-mining town of Ermelo, has silicosis - - lung scarring from inhaling silica dust.

"It feels like a bad flu, one that steals your oxygen," said Madonsela, who added that most of the miners he works with have lung diseases such as asthma, TB and silicosis.

Like many others, he has been worried about going to the clinic for treatment, fearing he could catch COVID-19.

Many miners, both formal and informal, are scared to get tested as they may be removed from the workforce, resulting in a loss of income, Sibanda said.

"We are afraid to get sick at the mines too, but hunger got the best of us," Madonsela said, pointing out the absence of protective equipment such as facemasks as miners emerged from the shaft lugging sacks of coal.

But as lockdown restrictions are lifted, Southern Africa's migrant miners are heading back to their former workplaces.

"Thus far, around 11,300 or 75% of foreign employees who left the country during the lockdown have returned to work. Around 3,800 foreign employees are outstanding," said Charmane Russell, a Minerals Council spokeswoman.

Mining companies are committed to screening all employees for TB and HIV at least once per year, Russell said, adding that those infected with either receive comprehensive treatment.

Sibanda said universal screening for miners with TB, some of whom will not return to the workforce, was vital for stopping the disease's spread into communities, and for saving lives.

"We need to make sure we actively find TB before people become sick," he said. "By the time you fall sick, recovery is less assured."

The Gauteng health department is worried about one of the five coronavirus patients in the province who suffers from kidney related diseases.
News
2 years ago

SA will push ahead with NHI as country emerges from pandemic: Mkhize

The number of South Africans who have called the SA Depression and Anxiety helpline this year would fill far more than one FNB stadium said SADAG ...
News
1 year ago
Next Article