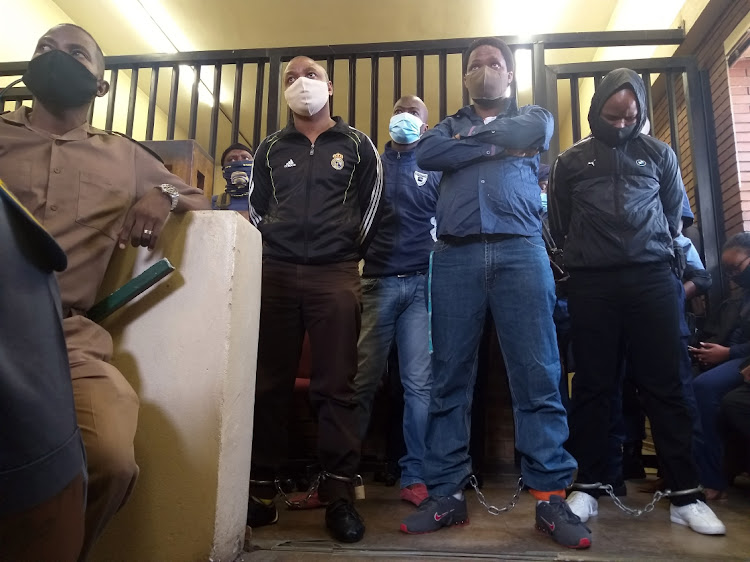 Some of the five men accused of Senzo Meyiwa murder in 2014 appeared at the Boksburg Magistrate's Court on Tuesday.
Image: ANTONIO MUCHAVE

The five men accused of killing Senzo Meyiwa caused a spectacle in court yesterday when they refused to step into the dock, refused legal representation and protested against being charged for the Pirates shot stopper’s murder.

The drama began when Sibiya refused to step into the dock before being charged, while Mncube, Maphisa and Ntuli protested about their arrests and subsequent appearance in the Boksburg magistrate's court. Mncube, the third accused, told the court: “I do not see the need to get a legal representative because I do not know why I was brought to court. I will not enter the dock because I didn’t kill Senzo.”

Mncube further said: “[Police minister] Bheki Cele said some of us were arrested from outside. We have been in prison for a number of years and that’s a lie. Don’t play with us.”

Three of the five men accused of murdering Senzo Meyiwa refused to stand in the accused dock at the Boksburg magistrate's court after telling the ...
News
11 months ago

Mncube is the alleged triggerman who is already serving time for taxi industry-related killings.  He is serving 55 years for crimes covering Vosloorus, Kagiso, Tsakane and Alexandra.  He was arrested in February 2015, just three months after Meyiwa's murder. A gun he apparently used in the murder of a taxi boss was linked to Meyiwa's killing through ballistic tests, according to police.

In refusing to stand in the dock, Maphisa, the fourth suspect, told the court: “The people who are supposed to be appearing before court are not here because they have money. It means the court will have to direct questions to me because I do not have money for legal representation.”

However, their protests were in vain as prosecutor George Baloyi read out the charges that the state was proffering against the five men. Baloyi said on October 26 2014, two men burst into the house in Vosloorus carrying a firearm and a knife.

A scuffle ensued between Meyiwa and a dreadlocked man, who was carrying a firearm. The state alleges a shot went off and hit Khumalo's sister Zandi in the leg. A second shot, according to indictment, went off and hit Meyiwa in the chest. Meyiwa was transported to a nearby hospital where he was certified dead at 9.15pm on that day.

It could not be established yesterday how all the men other than Mncube had been linked to Meyiwa's murder.

While the court drama was playing out, an internal document from the National Prosecuting Authority was leaked, which alleged that Khumalo was in contact with Ntuli, accused number five.

The pair allegedly communicated telephonically and that it was mentioned that there was a lender who allegedly gave money to “ostensibly pay hitmen and that this lender was pestering her [Khumalo] for the repayment of this loan”. Khumalo did not respond to questions sent to her.

In 2019, Khumalo told eNCA that she would not protect the identity of someone who murdered her child’s father. “One thing I will never do is protect someone who killed my daughter’s father. At what expense, really?” she asked.

Meyiwa's brother Sifiso Meyiwa told the media after the court proceedings that he was shocked by the five accused. “I am shocked because the police are the ones who brought them here, alleging they have also made confessions. I was hoping they would step into the box, but they don’t want to enter,” said Sifiso.

President Cyril Ramaphosa has welcomed the arrest of five people implicated in the 2014 murder of soccer player Senzo Meyiwa.
News
11 months ago

Three of the five men accused of murdering Senzo Meyiwa refused to stand in the accused dock at the Boksburg magistrate's court after telling the ...
News
11 months ago

Meyiwa family want to know who mastermind of Senzo's death was

The brother of slain former Orlando Pirates player and Bafana Bafana captain Senzo Meyiwa is eagerly anticipating coming face to face with the men ...
News
11 months ago
Next Article