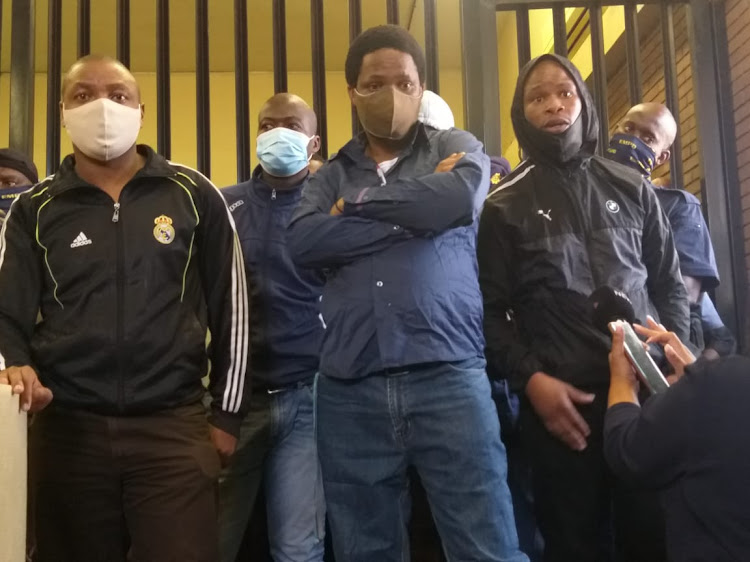 Some of the accused appearing at the Boksburg Magistrates Court
Image: Antonio Muchave

Three of the five men accused of murdering Senzo Meyiwa refused to stand in the accused dock at the Boksburg magistrate's court after telling the court that they do not know why they were being charged for the goalkeeper's murder.

A fourth accused refused to respond to magistrate Hans Havenga as he attempted to formally charge the suspect.

Mncube, the third accused, told the court that: “I do not see the need to get a legal representative because I do not know why I was brought to court. I will not enter the dock because I didn’t kill Senzo.”

Mncube further said: “Bheki Cele said some of us were arrested from outside; we have been in prison for a number of years and that’s a lie. Don’t play with us,” he said.

In refusing to stand in the dock, Maphisa, the fourth suspect, told the court that: “The people who are supposed to be appearing before court are not here because they have money. It means the court will have to direct questions to me because I do not have money for legal representation.”

Havenga told the accused that their refusal to cooperate was inconsequential because the matter was being recorded.

The five men are accused of murder, attempted murder, robbery with aggravating circumstances, illegal possession a firearm and ammunition.

The prosecutor advocate George Baloyi continued to read the charge sheet to the court which detailed the night on which Meyiwa was killed.

Police minister Bheki Cele and national commissioner Khehla Sitole will on Monday provide a much-anticipated progress report on developments in the ...
News
1 year ago
Next Article