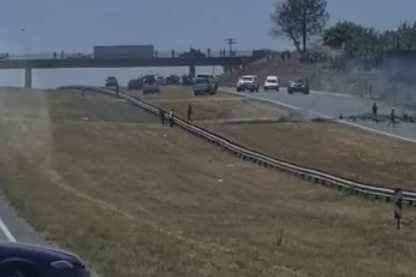 Protesters closed the N14 freeway near Beyers Naude Drive briefly on Thursday. They were apparently reacting to electricity cuts as Eskom and Red Ants shut off illegal connections in the nearby informal settlement.
Image: Florida CPF / via Facebook

Rock-throwing protesters briefly brought traffic to a stop on Johannesburg's key N14 highway on Thursday afternoon following a protest that spilled over from an informal settlement.

A video posted on the Florida community policing forum's Facebook page shows motorists making hurried U-turns and fleeing against the oncoming traffic while people and burning tyres block both lanes.

Metro police briefly closed the highway this afternoon near the Randburg/Zwartkop interchange with Beyers Naude Drive.

JMPD spokesman Wayne Minnaar told SowetanLIVE's sister publication TimesLIVE that the road had since been been reopened to traffic.

He could not say what had sparked the protest which had erupted in Mogale City, outside the JMPD's jurisdiction.

According to an unverified report in the Roodepoort Record, the protest started after Eskom cut the power to a large section of Muldersdrift to allow their technicians and the Red Ants to remove illegal power connections at nearby informal settlements.

The police have not yet responded to requests for comment.