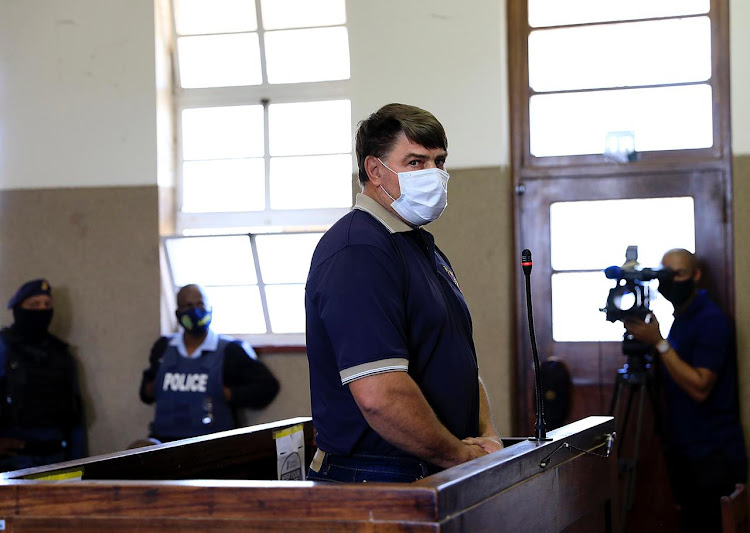 André Pienaar was denied bail at a hearing on Tuesday, after the State had opposed his bail application, citing that the accused had a violent streak and had previously served three years in prison for theft.
Image: ALON SKUY

The 51-year-old businessman arrested for his alleged role in a fiery protest in the Free State last week has been denied bail.

Providing reasons for refusing bail, Mlangeni said Pienaar told the court earlier that he had close ties with the community, but this was the same community he allegedly attacked.

Mlangeni said Pienaar was accused of attacking a female police officer who was executing her duty. This showed that he doesn’t hesitate to use violence against anyone who comes in his way.

He said there was a risk that Pienaar would interfere with the police investigation.

Mlangeni said the personal details of potential witnesses was easily accessible through court documents. In his short time in custody, he was able to identify witnesses who could potentially exonerate him, Mlangeni said.

“This was a deliberate attempt to jeopardise a criminal investigation.”

The 51-year-old businessman arrested after a fiery protest in Senekal in the Free State this week has a previous suspended conviction for theft. The ...
News
1 year ago

Mlangeni said Pienaar further allegedly tried to undermine the rule of law by damaging court property and holding cells, which could have led to the escape of awaiting trial prisoners. This potentially could have caused serious harm to the public.

Mlangeni said gunshots were fired in the courtrooms and personnel, mostly women, had to be evacuated.

Mlangeni said on the charges, Pienaar had no respect for law and order and therefore it was not in the interests of justice to release him on bail.

Pienaar, who owns a construction company, sat calmly, with his face covered in a blue surgical mask in the dock. He looked straight ahead as Mlangeni went through his bail application.

His wife was seated in the second row of the court. She wept when he was denied bail.

After court adjourned, she attempted to confront the witness for the state, Brig Tshokolo Posholi. She was held back by a family member.

Pienaar made his first appearance in court on Friday. Initially he was charged only with malicious damage to property and public violence, but the court heard last week that he faced two additional charges — attempted murder and terrorism.

In his affidavit last week, it was revealed that he had a previous theft conviction. He admitted to the 2011 theft for which his sentence was wholly suspended for three years on condition that he paid the money back.

Pienaar told the court in his affidavit that he was bipolar and on chronic medication.

The businessman was among those outside the court when an “unruly group” staged a protest to “demand justice” for murdered Brendin Horner.

Two men were appearing in court on Wednesday last week for the murder of 21-year-old farm manager Horner, who was killed one year to the day after he began working for the Scheepers family, close to the small Free State town of Paul Roux.

Brig Posholi, provincial head of the organised crime and commercial crime units in the Free State, previously told the court that a female warrant officer, clad in full uniform, who attempted to prevent the protesters from entering court, was threatened and throttled.

The court heard the accused was a violent person and his actions, aimed at the two murder accused, showed “an element of resentment”.

On Tuesday, roads leading to the court were barricaded with police tape and nyalas. Armed officers with vehicles stood close to the court and a trailer with barbed wire was also seen in the area.

In contrast to last week, a doctor’s practice close to the court was now open.

No supporters were seen close to court.

The case has been postponed to November 20 for further investigation.

*A earlier version of this story stated the wife had tried to slap the police officer. This is incorrect. She did approach him and was held back, but did not accost him. We sincerely apologise for the error.